Let's face it: free phones are usually synonymous with crap phones. That's what the Optimus U is trying to change - and, at least on paper, it looks like it might just be able to accomplish the task. That said, this is a phone sold by LG and US Cellular, both of whom have yet to display real talent when it comes to Android - and there's a lot that could go awry, what with the lack of Flash (both on the camera and in the browser) and the 600 MHz processor. So did the two companies succeed? Has a free Android phone that doesn't suck finally been made available? You'd be surprised.

The Optimus U isn't exactly the most exciting phone on the market, but its specs are still far from obsolete: 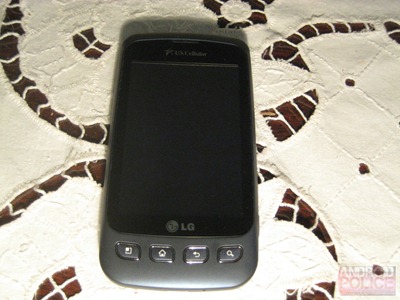 The Optimus U has a distinctive high-end feel about it that immediately makes it clear that the phone is more than just another budget Android device. Coupled with its sexy (and unusual) blue color, it's obvious that LG's actually put a fair amount of thought into the Optimus' design.

On the front of the device, you'll find the 3.2-inch display, US Cellular and LG logos, the earpiece, the standard array of Android buttons (Menu, Home, Back, and Search, respectively), and a backwards chin of sorts. The latter in particular looks quite nice - whereas some last-gen HTC phones had a "chin" that jutted outwards, the Optimus U has a slight curve at the bottom that goes inwards, which makes pressing the buttons quite comfortable (in addition to making the sides look even more tapered than they would otherwise).

Notably missing? An LED notification light, which is absent from all Optimus One models. This might not sound like a huge deal, but it turns out that even with Android's excellent notification system, the lack of a physical LED light can become quite annoying. Of course, most feature phones don't include such notification systems either, so the U's target market probably won't care much, but it's still frustrating to seasoned Android users. 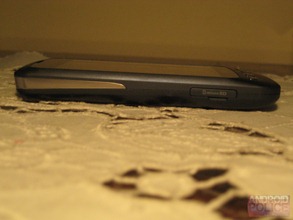 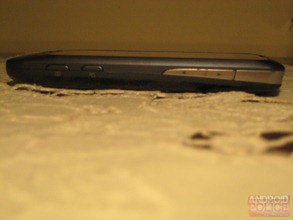 Speaking of the sides, they're where you'll find the microSD card slot, the volume rocker, the camera button, and the Voice Dialer shortcut key. Additionally, the top contains a 3.5mm headset jack and the power button, while the bottom is where the microUSB port and microphone hole are located.

There's more to the rims than just the buttons on them, however: although the aforementioned inverted chin definitely adds to the the sides' slickness, the Optimus U also has a number of other sexy tricks hidden up its sleeve. For example, there's a silver band that runs around the top half of the phone, into which the headset jack, the power button, and the volume rocker are integrated. Additionally, the entire phone is amazingly thin, especially when you take the fact that it's a low-end device into account - in fact, it's just 0.52" thick at its thickest point. 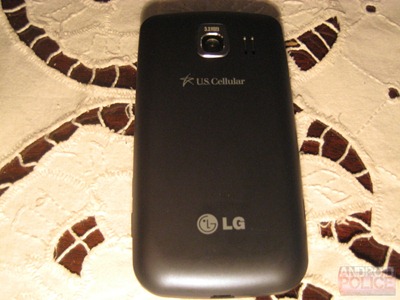 The back of the device contains the 3.2MP camera, the speaker grill, and both US Cellular and LG logos. It's fairly nondescript - it's neither better than nor inferior to your average smartphone's battery cover. 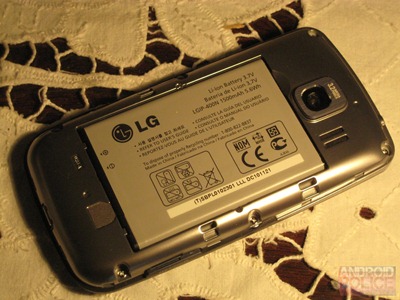 However, lift the battery cover up to discover another part of the design LG's clearly put a lot of thought in to - in the tradition of the HTC EVO 4G, Droid Incredible, and Aria, the Optimus U's internals are entirely silver. While it's not quite as showy as the sexy red (and yellow) interiors on the aforementioned HTC phones, it does make for a sleek and robotic (yet at the same time very humble) aesthetic. Frankly, I like it even more than I like the rest of the design - and that's saying something. 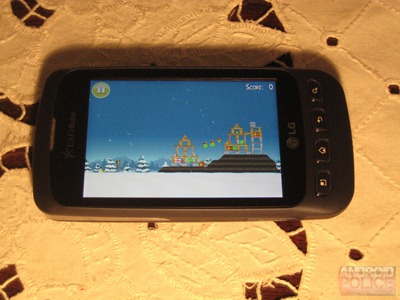 The Optimus U's display is pretty much exactly what you'd expect from a phone whose carrier offers it free on contract. That's not to say it's mediocre, but if you're looking for the likes of Super AMOLED, you'd better look elsewhere.

While 3.2" is a reasonable size for a device of this caliber, the display's colors are significantly less enjoyable. They're not that bad - I've definitely seen worse - but they're more washed out than almost any other smartphone I've seen in the last year or so. Additionally, I'm not sure what causes this, but fingerprints were extremely visible on this phone - though this could be have been a side effect of getting used to displays with oleophobic coating.

On a more positive note, the screen can get pleasantly bright, and viewing angles aren't bad at all (things do start looking a bit yellow when you're looking at it from the side, but that's to be expected).

As for typing, it wasn't nearly as easy as it was on the Droid Pro, which surprised me since the Pro's screen is actually a tenth of an inch smaller. Out of the box, LG offers Swype and the stock Android keyboard, neither of which I enjoyed, so I ended up downloading the Gingerbread keyboard. While it boosted my typing speed and accuracy significantly, it still wasn't exactly a joy to use. Suffice to say, if you're a heavy texter, US Cellular and LG's own Apex might be a better choice for you.

The Optimus U's 3.2MP shooter is far from perfect by modern smartphone standards, but it will do for the occasional shot - and that's really what it's there for. Have a look at some shots I took with it before making your own decision: 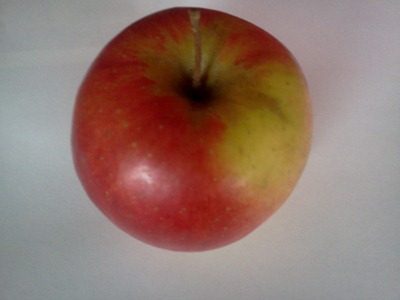 Average lighting: not perfect, but still acceptable for a free phone. 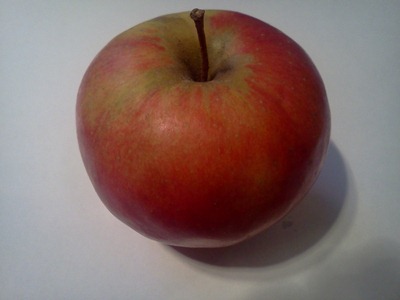 Above average lighting: disappointing, even for a low-end device. 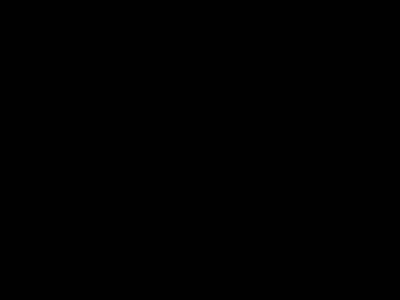 The fact that there's no flash on the camera didn't help with low-light pictures, and the "Night" mode made no difference at all.

Given that it's limited to VGA resolution (640x480), video recording actually wasn't all that bad. I will say that the audio quality didn't always sound quite right, but the videos I captured with the phone looked smooth enough and contained little graininess. Not mind-blowing, but not horrible, either. 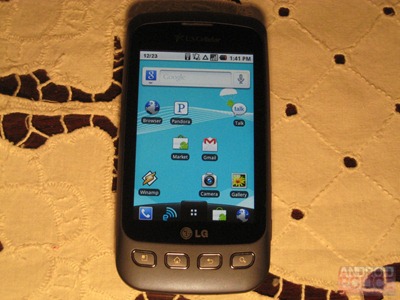 As I mentioned in the previous section, LG's added its own camera app. Unfortunately, that's not all they've added - not by a long shot.

Strangely enough, the Optimus U ships with a "Home Selector" app, but the only launcher it includes is LG's proprietary UI - the stock Android launcher is not included. Luckily, LG hasn't tweaked the Android launcher much - the homescreens are nearly identical to those of stock Froyo. On the other hand, the tweaks they have made seem to be there for no reason other than to ruin the Android experience. For example, the application launcher is no longer one long, alphabetically-organized list; LG has separated it into two sections: "Applications" and "Downloads." By default, the latter is populated by applications downloaded from the Market and elsewhere, while the the former is comprised of system apps that came with the device. This can be changed, but dragging items across the launcher one by one is cumbersome and not something that the user should have to do - if LG really had to include this behavior, they should also have included an option to automatically sort all applications into alphabetical order regardless of where they came from.

Obviously, I'm not thrilled about the bloatware here - as usual, some of it duplicates stock Android functionality - but compared to the crap that comes with some Verizon or AT&T devices, it's still not too bad.

As an added (and a very unexpected) bonus, LG hasn't messed with Froyo's tethering capabilities. Just jump on into the "Settings" app, select "Wireless & networks," go to "Tethering & portable hotspot," and voila!

One thing that alarmed me when I first learned about the Optimus U (and the entire Optimus One line of phones, for that matter) was the lack of Adobe Flash Player 10.1, one of Froyo's most famous features. As it turns out, Flash isn't so great on a mobile phone, and I can only imagine how choppy it would be on this particular 600 MHz-packing one. Therefore, it's not as much of an omission as you might think it would be - in fact, I think LG may have saved us from ourselves by omitting Flash from the Optimus One phones.

Other than the changes mentioned above (and some custom LG widgets), Froyo has been left relatively intact. Sure, the customized application launcher isn't exactly ideal, but at the end of the day, it's nice to see LG introducing a whole new demographic to relatively stock Froyo.

Performance is really where the Optimus U shines - in fact, a run through Quadrant confirmed it to be more capable than both the original Motorola Droid and the Sony Ericsson Xperia X10, which packs a 1GHz Snapdragon processor. Not bad for a budget phone whose resources are limited to 600 MHz by the Qualcomm MSM7627 CPU.

As for daily usage, I doubt you'll be disappointed. While the Optimus U's speed isn't quite on par with the performance I've come to expect from my EVO 4G, it's still more than acceptable when you consider who the Optimus U is aimed at. Even with the aforementioned hardware limitations, the phone was able to run Angry Birds quite smoothly while simultaneously playing Pandora in the background. So yeah, if speed's what you're worried about, your fears have just been dismissed.

Battery life was also surprisingly good - the phone was able to replay Google's official YouTube video of the first half of Day 2 of I/O 2010 just about six times, which took around four and a half hours. For the sake of comparison, the mighty Droid X only lasted three hours and twenty-five minutes, while the Droid 2 lasted three hours and forty. Then again, the feature phones Optimus U customers are probably used to have battery life even better than this, so it won't be quite as impressive to them as it is to us Android enthusiasts.

Unfortunately, the Optimus U's call quality wasn't nearly as impressive as general performance or battery life. Calls frequently cut out, and static was easily audible in a few cases. Not ideal, and neither were data speeds - I got between 1 and 2 Mbps down, even when I had a strong signal (which, mind you, I had to drive quite a while to obtain). 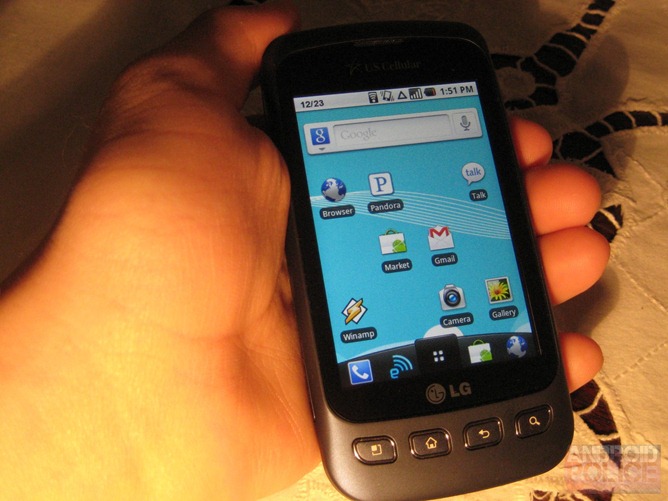 The Optimus U certainly isn't the hottest phone on the market - in fact, it disappoints on more than one key point. However, if you've been on the lookout for a free smartphone that won't embarrass you in public and doesn't take half an hour to open an app, you've found your match. Ultimately, the underwhelming camera, mediocre display, and custom LG UI weren't able to ruin the Optimus U's otherwise excellent feature set, and none of these flaws are serious enough to keep me from recommending the phone.

VLC Player Coming To Android In "A Matter Of Weeks"

Run, Run, As Fast As You Can: A Round-Up Of Gingerbread ROMs