carrier-billing-androidThat's right, carrier billing is now available for some Android users on the least Android-friendly wireless carrier in the US. Huzzah. I guess I shouldn't be so cynical - I am an AT&T customer, after all. Unfortunately, I also run CyanogenMod 6 on my AT&T Nexus One, and have not yet received any Market update to allow me to use carrier billing, and doubt I will until an official Gingerbread build coaxes me off my custom ROM goodness. 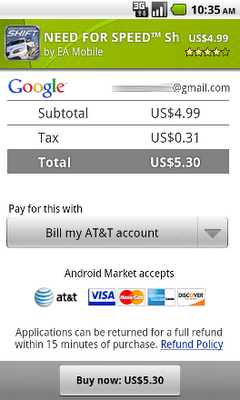 The Android Developers blog has stated the carrier billing option will roll out to phones as part of the larger Market update that has been floating around in ZIP form for a couple of weeks - but it remains entirely unclear what phones or versions of Android will be eligible.

More importantly, this probably isn't a big deal for most people already using Android devices on AT&T, especially not US customers. Google Checkout has seen a rapid expansion in its user-base since Android's commercial debut, and it's safe to say there's not a lot to be gained for current users by making a switch to carrier billing of app purchases. For new Android users on AT&T, it will certainly make the Market's paid apps much more accessible - especially to older, less tech-savvy Android converts.

Oh, and of course to under-18's charging to mom and dad's wireless family plan. I personally think this is the root of 99.9% of the complaints about the lack of carrier billing of paid apps in the US.

My implication there is that the vast majority of those complaints have come from abroad - where Google Checkout just isn't a viable option (or is unavailable). Developers worldwide are eager to get their apps sold in emerging markets such as Southeast Asia and Eastern Europe, but are often barred from doing so because of a lack of paid app support in a great number of small, emerging economies. The result? App piracy rates exceeding 90% in some locales.

While Google has promised the expansion of Checkout on a number of occasions, it seems to be having difficulty making good on those promises, and developers are paying the price.

How To: Customize Your WidgetLocker Lockscreen

SlideScreen 2.0 In The Works, Beta Build Now Available For Download