Though it previously retailed for $599, the Verizon version of the Samsung Galaxy Tab can now be purchased from Best Buy without a contract for just $499. The price drop may be an indication that the WiFi-only Galaxy Tab could retail for much less.

Update: It looks like this is fake! Our own source at Best Buy, as well as calls to various brick-and-mortar locations, suggest to us that this is just a case of Photoshop trickery. Sorry for any confusion! -- Aaron
Update 2: According to commenter K, this deal has indeed been going on for a bit - to get the discounted price, you have to sign up for at least the $20 plan, which can be canceled after the first month. We have not confirmed this information yet. -- Artem

The new price also puts the Galaxy Tab in direct competition with the cheapest Apple iPad (16GB, WiFi-only), which also retails for $499. 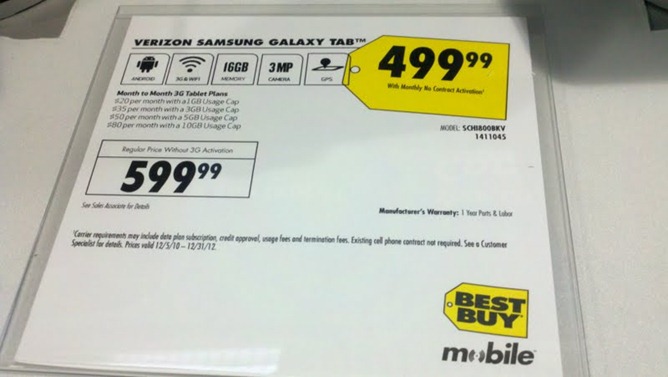 Although this version of the Galaxy Tab does not come with a contract, it still requires a Verizon account to activate it after purchase. The monthly price plans are as follows:

After purchasing the device and signing up for a plan, you must commit to it for at least a month before you are allowed to cancel the contract. Still, it's a decent deal - enjoy!