Google's recent updates to the Android Market have further refined the process of installing and purchasing apps, but they still haven't developed a suitable desktop alternative to browsing the thousands of Android apps available. AppBrain is a third-party website that fills this gap by allowing users to browse apps on their computers and then choose which ones to install on their phones.

AppBrain is a great tool, but it is limited by the policies of the Android Market, which allow almost any app to be installed. Unlike Apple's App Store, Google does not employ any kind of filtering system, so there are a number of apps which could be harmful for end users (i.e. apps with sexually explicit content, apps with malicious code, and apps which are merely spam). Therefore, users have, up to now, had to wade through hundreds of useless apps before finding the one that they are looking for.

To alleviate this problem, AppBrain has added a "mature content" filter, which warns users when they are entering a page for a sexually explicit app. According to the Android Market Content Policies, these apps shouldn't be in the Android Market in the first place, but pornographers probably don't care about that. According to AppBrain, these sexually explicit apps will not be censored or removed from the AppBrain website, but will instead be hidden from most users. 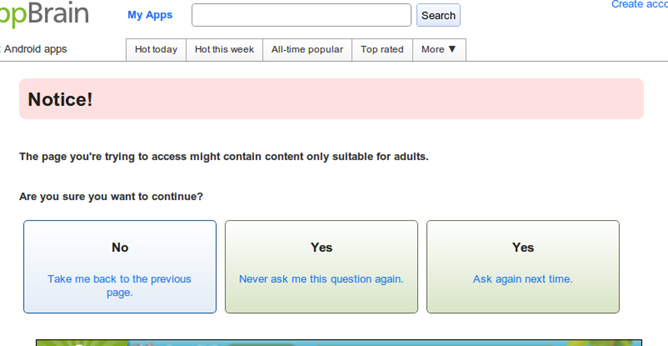 The new feature launched today on the AppBrain website, and will be available on AppBrain's Android app after the next update.