As promised earlier this week, Notion Ink CEO Rohan Shravan took time out of his schedule to answer a number of questions from Android Police. What did we ask the creator of the Android world's most anticipated tablet device? A lot of the questions you, our readers, wanted answers to - as well as a few of our own. The interview, in its entirety, below.

Questions From Our Readers

AP: Many have speculated about Notion Ink's production capacity - can you tell us how many Pixel Qi units were sold on pre-order? How many do you expect to be able to produce per month?

Rohan: Any business related information would be released in the Annual Reports. Our production capacity doest not match to what Samsung or Apple can do, but will be good enough to match the demand, and as Pixel Qi ramps up their production quantity we will go out of stock less frequently.

AP: A lot of users are asking questions about shipment dates, will the earliest pre-order customers be receiving their devices more quickly than those who bought in the "open" pre-order?

Rohan: No, the system was based on first come first serve basis and was mentioned in the email which was sent to all. So if you are given a window to pre-order and you take 4 hours to finalize the shipping, you get the shipping date available after 4 hours. We have spruced up all our partners and hopefully we will be able to "pre-pone" all the shipment to January. This specific update will only be sent by the end of December to our February customers.

AP: Can you confirm that the Adam will ship without the Android market?

Rohan: Android Market makes sense only after Honeycomb which will support higher resolution and bigger screen. This is the sole reason for the existence of Genesis where you have only Tablet, Higher Resolution Apps. Google's policy clearly states that Market is there only for Phones (Samsung Galaxy Tab is a phone).

AP: Has the trackpad been disabled or removed on the production Adam?

Rohan: It has been disabled since we need to give a mature solution. The possibilities are enormous on improving the Usability and we want the perfect solution to be made available to the users. We are working on some functionalities and it will only be enabled in next generation devices. Since we removed one, we had to add one, and thats our mystery feature.

AP: When can reviewers expect review units? Many customers want to see a review of the Adam before they dedicate to a purchase.

Rohan: Few reviewers have ordered some units already. Hands on review, you can get as soon as any user gets it, and CES is also there (plus the video we are making for you).

AP: Have any US/UK/Europe retailers partnered with Notion Ink to sell the device in their stores?

Rohan: Yes. We will release the press note as soon as products are ready with them.

AP: Can you provide us a link to the actual device warranty for the Adam? [note: I was unaware the warranty was now available when I asked this question]

Rohan: It is already available on our website, please check this link

AP: How will Adam users obtain technical support? Repairs? Do you have any authorized repair/service locations outside India/China?

Rohan: Same information is also available in the warranty document. We don't have any repair/service locations in India.

AP: Has Notion Ink partnered with any companies to produce Adam-exclusive accessories? Which ones? For what sort of accessories?

Rohan: Yes, but work in progress cannot be released of now. Products will be only available after testings and certification are done.

AP: What can customers expect when they open the box with their Adam? What kind of peripherals? Cables, etc.

Rohan: Adam comes with special Box design which can be converted into a stand, a charger and Matte Protection Film.

AP: Regarding the 3G model, how many frequency sets are being offered? In the US, AT&T and T-Mobile run on different 3G bands, necessitating at least two US 3G models.

Rohan: Initially we offered only one 3G module which was suited for AT&T, but then when customers requested we changed their models. From next pre-order everyone will be given an option of deciding their own 3G module for a specific frequency.

The Eden UI And Apps

AP: Is the Eden UI very responsive? What parts of the Android UI do you feel you've improved on with the Eden UI?

Rohan: Its very responsive. We have paid a lot of attention to catch ANRs (which is by default fixed at 5 seconds in Android) which might come because of Networking and UI threads not talking to each other. You have a 10 inch screen a LOT of area where a user will interact as compared to a phone which is just 4 inch. This is one special area where Eden has a lot of advantage. We have taken a lot of inspiration from Magazine Designs and each app tries to bring in a new expression and experience like different topics in a magazine, instead of sticking to one theme. But the overall system stick to common principles to make the flow seamless from one application to another.

AP: What unique apps will be shipping with the Adam?

AP: Can users expect more apps to become available from Notion Ink over time? Are there any apps you'd like to tease that will be coming?

Rohan: Yes, a lot more since we all are extremely excited about the Panel system and the possibilities available. There is one beautiful application for note taking which we are working on and will come as an update, plus a better Camera application. 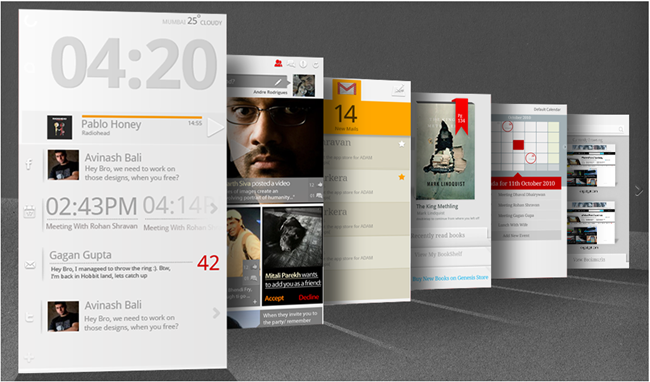 Render of the Panel Engine Concept

AP: Do you plan to preserve the Eden UI when Honeycomb is released? Or will there be a major overhaul?

Rohan: Eden UI will be preserved even when Honeycomb is released.

AP: Are there any special features to the Eden UI you'd like to point out or discuss?

Rohan: Keyboard support multi-touch and have very fast access to nearly all the keys. We have tried to make a closer integration of apps which we have created. This allows us to create a flow and make life easier. For example the browser comes with build in (multi-touch scroll call) snipping tool which sends the screen shots to the Notes application directly. This ensures that you can create your notes in seconds and flow is maintained!

AP: What is the "Panel Engine" concept? How does it help Adam users? Does it increase performance?

Rohan: Eden comes with a completely new concept of Panels for multitasking. Every application can have 3 states, sleep, panel or full. In Panel modes you can get fastest access to all the application content (made available to panel). For example you need to chat as well as read a RSS feed, and simultaneously read a web page, Panel system allows you to do that. May be you want to calculate something while you are sending someone quick email and copying content from a webpage, there can be infinite use cases where Panels makes your a life easier! You can drag panels around and make them sit in any order you want. We believe its a breakthrough in the way we multi-task, and would like to see what people think about it. The Font rendering on Adam is also lot better than other Android Tablets.

AP: Do you have any developers in line to created Adam-specific apps that users across the globe will be excited about?

Rohan: Yes, but we cant go into details.

AP: Are there any notable materials or techniques being used to make the Adam more durable or "solid"?

Rohan: Adam has built in Magnalium Chassis which provides it strength and is low on weight as well. The side strips (named as decorative bars by our manufacturers) can be made available in different colors so users can customized their Adam.

AP: In regard to the Tegra 2 processor, how much are you taking advantage of the dual core parallel processing?

Rohan: General application designers are not sure that on which platform the application will be working on. Hence the Parallel Computing is not done at all, and threading concepts are not properly optimized. Since as OEM we have little more idea, we can assign threads to different cores and ensure that the application remains responsive. For example the Panel concepts draws little away from one activity concept in Android. These optimization have helped us to improve and actually make Eden possible.

AP: When will the Genesis SDK become publicly available?

Rohan: We want to make SDK available only after Android 2.3 is available (EAP plan is different from this)

AP: When will  the Adam source code be made publicly available?

Rohan: We will share this information after SDK availability.

AP: Has Notion Ink started work on any new hardware? Could we get a taste of what Notion Ink's future plans might be?

Rohan: We wont let anyone speculate this time by releasing information this early. We have really learnt a lot from Android Police.

US Cellular Cuts Galaxy Tab's Price In Half - Just $199.99 On Contract

The Sims 3 Now Available In The Android Market For $5