Our pal Dan Ruby over at Chitika just shot us a note to let us know that he's run the numbers and come up with a prediction for when Android will take over the #1 position in market share in the US, based on ad impressions on Chitika's network. The result: February 16, 2012... at 12:23 PM EST.

He's put a fair amount of time into crunching these numbers - last we'd talked to him (two weeks ago), he was already working on it. With that in mind, it's hard to argue that he's wrong - and it's even harder to argue without running my own numbers or putting in my own research. Nevertheless, call me crazy, but that's just what I'm going to do, based purely on previous knowledge and (mainly) intuition. 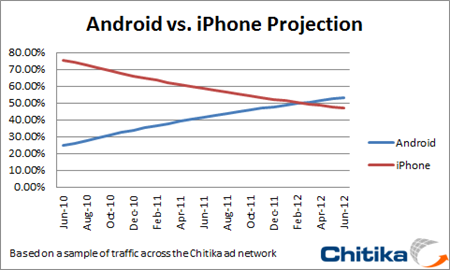 While his math seems plausible - certainly well within what I'd consider my own margin of error - I'd consider them a conservative estimate. As Dan points out: as of December 14, iPhones outnumber Android devices on the Chitika network by 2:1, with iOS having roughly 66.7% of the market, and Android at 33.3%. Sounds like Android has a ways to go, until you consider that the ratio was 3:1 (75%:25%) back in June.

That's a pretty huge leap to make in just six months, and Android has been experiencing phenomenal growth. Just last week we found out that 300,000 Android handsets are being activated by end users per day. Steve Jobs bragged in September that there were 230,000 iOS devices being activated per day; unfortunately, that's something of a marketing gimmick - that figure would include the iPhone, iPod Touch, and iPad. Boil down to just the iPhone and it's likely that Android is outselling the hell out of the iPhone.

Then again, it's important to reiterate that Dan's projection was for the U.S., where iOS is still dominant. Not so in Europe, where Android has become the smartphone of choice. The activations figures above are also global.

Ultimately, I'm saying I think it will happen in (very) late 2011. Pretty close to Dan's estimate? Sure is. But then again, I'd only rank my confidence in my guestimate at 60%. What do you think?

For Developers: Live On The Edge - Upgrade To The Latest Eclipse ADT (Currently v9.0.0) Before ...