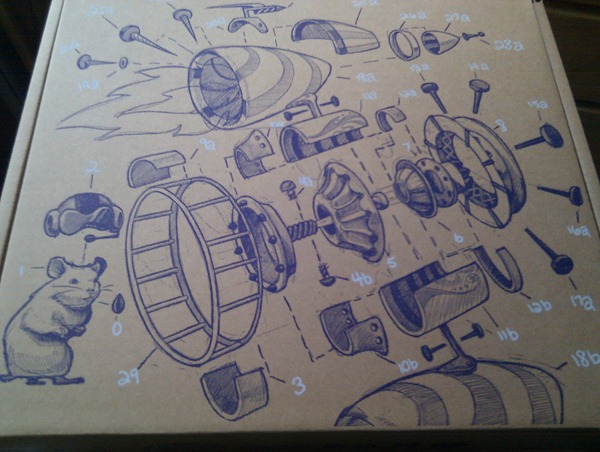 Like a giddy child I tore away the outer shell, and found Google's weirdly endearing box artwork revealed. Given everything I'd read about the CR-48 (a lot), I'll say this now: I didn't go in with the absurdly high standards or expectations many gadget reviewers did. I knew I should be prepared for an unfinished, unpolished, beta product.

And, as it turns out, this is probably the best way to approach the CR-48. I'll very briefly summarize the specs, as they really aren't all that important (though I am going to wax poetic about the design, because all laptops should be this way)- the OS and the concept are the focus here:

It isn't a MacBook Air. It's not even a plastic standard MacBook. Google calls it a notebook, if only to avoid the recently diminutive connotation of "netbook". But in reality, the CR-48 is what the ideal netbook (read: "net") should be, at least in the ways that really matter - but I'll discuss that a bit later.

What's in the box?

A charging cable, a battery, and the device itself. The battery is quite large - unsurprisingly, it can power the CR-48 for 6 hours of continuous, maximum screen brightness use. Not shabby. The battery also comes 50% charged, so you can begin your mobile adventure in the cordless fashion immediately. 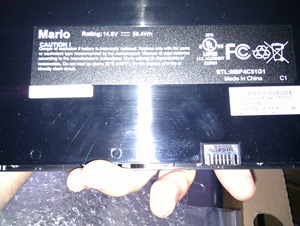 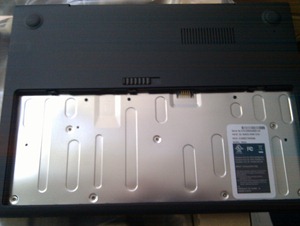 The device, as you've all probably already ogled it before, is nothing extraordinary. But this, as Gizmodo pointed out, is where a lot its brilliance lies. The CR-48 was clearly designed from the aesthetic standpoint of streamlined utility, coupled with a philosophy mobile durability, with an emphasis on economy. The result? Rubberized matte black plastic everywhere. And it works - the CR-48 is beautifully non-descript, extremely solid feeling, and has as few seams as possible. Think black MacBook meets ThinkPad.

No creaky plastic, no stickers, no sharp edges, no odd beeps or whirrs when you boot up. The CR-48 is the world's most humble notebook. Adding to that humbleness and simplicity, there is approximately one page of documentation included with the device. Of course, it directs you to a number of websites that have additional documentation, but it's nice not to have to deal with a bunch of paper when you're trying to get your geek on. 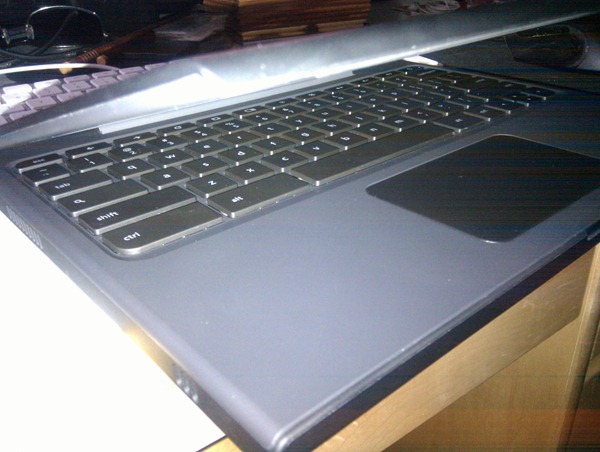 As you can see, my Nexus One's camera is not doing well.

Once you do open it, the almost eerie MacBook similarity goes from a creeping suspicion to an outright "I see what you did there." The keyboard action and design model Apple's, including the actually functional function-key replacements, as well as the oversized one-piece trackpad. 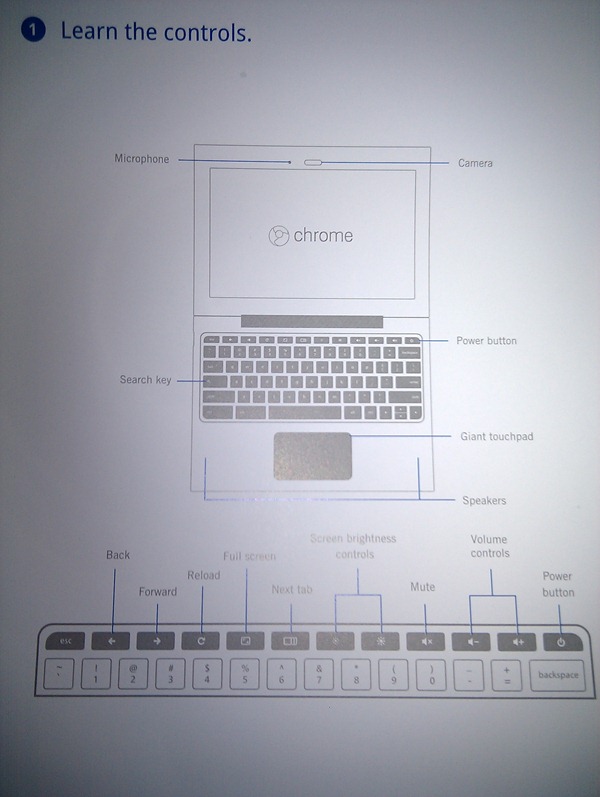 Personally, I love it - I owned a newer MacBook Pro for a while and I still give Apple credit for designing the best keyboard / trackpad combo to ever grace a laptop. The CR-48 and Apple notebooks are the only laptops I haven't felt are hugely annoying to use from a comfort standpoint (at least without a wireless mouse). This, for me, puts the CR-48 above any other budget-minded laptop ever spawned.

For all practical intents and purposes, it is. Cold boot startup takes 10-12 seconds from button press to login. Waking the CR-48 really is instantaneous, I'd say once you have the screen pulled up to the "awake" point, it takes anywhere from 0.5-2 seconds to leave off just as you left it. Whether it be Windows, OS X, or Ubuntu, no other OS in true sleep mode can make a claim to rival that.

How snappy is it once it is on? It depends - time from the login screen to the browser varies, anywhere from almost instantaneously to 5 seconds, depending largely on the number and complexity of the tabs you had open last. The bottleneck here is undoubtedly the Intel Atom N450 processor which powers the CR-48. Luckily, the N450 does support hyperthreading, so it's not nearly as gimped as the first generation Atoms that graced many netbooks in 2009.

Anyway, getting started on the CR-48 is dead simple: connect to WiFi, enter your Gmail account of choice, take a delightfully absurd picture, and go. You can skip the internet connectivity and just go into the OS directly if your WiFi needs web-based authentication, so no worries there. 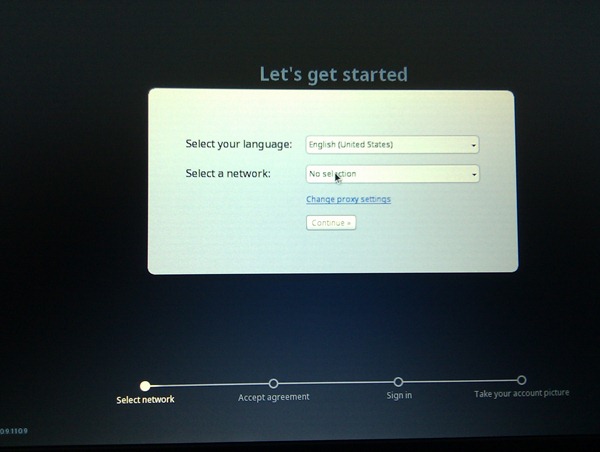 Once you sign in, your Chrome extensions and Web Store apps (if you use Chrome) populate into their proper places, and you're automatically signed into your Google account and related services.

What can you do? Anything you can do in the Chrome web browser, and a little more. There's an integrated Google Talk app from the Web Store you can install, and I like it a lot better than the Gmail-based version. Other CR-48 specific tweaks include mouse sensitivity, user and guest access management, and network settings.

As has been touted, the CR-48 comes with 100MB per month of free Verizon 3G service. Many had no difficulty signing up - I did. Upon attempting to activate, I was merely sent to the "sign up for a plan" generic page, with no indication of any CR-48 specific options. I called Verizon, and a very nice representative (who was indeed familiar with the CR-48 promotion) tried to walk me through manual activation, which didn't work. After about 20 minutes, I gave up and thanked her for trying.

Miraculously, I tried again 10 minutes later and the activation page led me to where I wanted to go. Weird. It also appears you'll have to renew your subscription every month if you want to use that 100MB freebie, but obviously I'm not certain yet.

The Chrome OS is a glorified web browser. Everything you can do in Chrome, you can do in Chrome OS. There isn't much more to say - yet. The OS is designed to be lightweight, instant on, battery friendly, and as independent from local storage as possible. It succeeds on most of those fronts. And on all of those fronts it will only get better, particularly as Google optimizes their services for use on Chrome OS devices.

Chrome OS uses a nifty window-pane feature so that you can have multiple "panes" open at once, and you can swipe through them using a function key. The action is super quick, and it's very useful. I keep one window for personal and social, one for news, and one for Android Police-related things, it makes organizing your browsing a lot easier than relying solely on tabs or the clumsiness of windows - think home screens for your browser.

Also, having caps lock as the "Search" button is nice (it just pops open a new tab at this point), as is having dedicated forward, back, and refresh keys.

So, what about the issue of speed?

The processor in the CR-48 really makes Chrome OS feels downright sluggish when compared to the quad-core AMD Phenom II my desktop is packing, but that's to be expected. A dual core model would probably speed up things significantly, so I'm not going to chastise Google on this one - the N450 is cheap, power efficient, and it gets the job done.

Chrome OS is like being on the internet, but all the time. Kind of obvious. I'm going to have to switch to Google Docs if I want it to be a productivity machine. Fair enough. I can't do my blogging on it (we use Windows software here), and that kind of sucks. There are a number of things you can't do, of course. But really, Google makes a fair point when they say that for the average non-techy, most things you'd want are there. The average person really does "live" in the browser.

It's Awesome, But Why?

I fail to understand why so many reviewers have been trying to compare this economy-notebook to even an entry level MacBook; it's a test device, and people are receiving them free of charge.

If Google were to sell the CR-48 or something very similar (which I don't see happening), I wouldn't expect to pay more than $400 for it - well within the bounds of netbook pricing territory. But the CR-48 is ten times the netbook of any netbook out there right now, and that's what is so important emphasize. How so?

The build quality, for one. This thing feels even more solid than a plastic MacBook, in my opinion. You get that sense of confidence that dropping it a few feet wouldn't be the end of the world - which it might not be, as the CR-48 has no optical drive or spinning disks to worry about.

It doesn't get as hot as a netbook. The battery lasts longer. The screen is bigger, brighter, and just better overall than any netbook I've seen. Anything smaller than 12" is just not worth it (that's what she said) on a laptop display, in my opinion. It's quicker than Windows netbooks. Finally, my mom could figure out how to use it without any instruction at all - and that's saying a lot. This should be every netbook, and I think that's what Google is trying to say with it.

Think about how many things you do in your browser. Gmail is almost ubiquitous, as is Google Talk. Video, whether Flash or HTML5 (Note: the CR-48 sucks at Flash, I'm thinking this is the OS more than the processor, though, given odd Flash behavior I've experienced). Social networking: Facebook and Facebook chat, Yelp, 4Square, Twitter. Productivity: Google Docs, SlideRocket, ManyMoon, Google Apps. Music: Pandora, Grooveshark, last.fm.  I mean, think about any of the Google web products - they're all designed for use in a browser environment.

There are some things, though, that I admittedly miss. Namely, a media player. While Chrome OS will play MP3 files that you download automatically, that's about the limit of its media associations. Yep - MP4 video, AVI, MPEG-[1,2,3], WAV, and just about every other media file won't play. There was a "enable Media Player" check box in the options when I got the device, but it mysteriously disappeared in the latest update.

What else does Chrome OS not do? Built-in webcam video recording or picture-snapping. You can upload video directly to YouTube, but this runs through a Flash interface, and the quality is unbelievably poor. I haven't tested the Google Talk video chat, but presumably it works a little better. There's no easily accessible file browser. No support for Android devices (yet). Chrome to Phone doesn't work (I imagine this will get fixed eventually).

Considering what I really use it for, though, most of those things aren't super important - they're things we expect out of a media center device, not a high mobility productivity laptop.

All in all, I'm just happy I got a free laptop, and I'm eager to see what the Chrome OS team will change, add, and fix over the coming months. If anything exciting happens, we'll keep you on the up and up.

Dolphin Browser Mini Goes Into Public Beta, Offers Much Faster Performance All Around