The Samsung Continuum shaves .6 inches off the original Galaxy S' 4" screen, in exchange for the very unique (and surprisingly useful) secondary Ticker display, but is that enough to justify the phone's existence? How does it stack up against the rest of the Big Red's high-end Android line-up, including the Samsung Fascinate, the Continuum's Galaxy S brother? Read the full review below to find out. 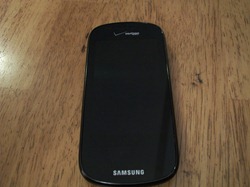 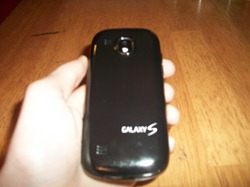 The first thing you'll notice about the Continuum is the totally smooth front. Although advertised as having two screens, the Continuum actually has one large Super AMOLED display, with the capacitive buttons placed between the main display and the "Ticker". I anticipated missing physical buttons, but I found that the capacitive buttons were incredibly accurate - I never ended up having to tap one twice.

The back of the phone sports the same checkered plastic back that adorns the Fascinate. It isn't too noticeable during actual use, but it will collect fingerprints extremely quickly, and makes the phone feel very cheap. The mechanism of opening the back can be somewhat frustrating, and every time I attempted it, I felt pretty confident it would snap. It really gives the impression that Samsung did not put much effort into the build quality of the device. Still, it feels solid in the hand without being too heavy, and that will probably be enough for most users.

Along the sides, you'll find the volume rocker, nicely separated into two buttons, the miniUSB port, a camera button, and the microSD card slot, with the headphone jack and power button resting up top.

On the back, the camera, which is slightly raised to prevent scratching when it is laid down, is centered towards the top of the phone, with one speaker adjacent to it and the other near the bottom. This allows for surround sound that's actually executed fairly well, and although you'll probably be using headphones the majority of the time, the speakers pack quite a powerful punch - they were just as loud, if not louder, than my netbook. 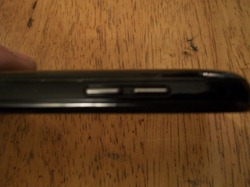 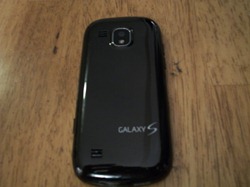 Although the display has changed considerably, the insides of the Continuum are the same as other Galaxy S devices:

We may already be looking toward dual core phones, but there's a reason 1 GHz has become the standard: this phone flies. From basic tasks, like swiping through home screens and web browsing, to playing a variety of 3D games, the Hummingbird processor simply does not let up.

If you're interested in benchmarks, it scored an 823 in Quadrant, putting it on par with other Galaxy S devices. You always have the option of applying the Galaxy S "lag fix," but honestly I haven't seen any performance issues that would warrant it. The phone is simply a joy to use.

As is standard for today's smartphones, the Continuum has a 5 megapixel camera with LED flash, and is capable of recording video up to 720p. This certainly won't replace a point-and-shoot, but it definitely works if you just want to grab a quick shot. A dedicated camera button is included for this purpose, but unlike other physical buttons on the phone, it requires you to firmly press it for about a second before it launches the camera app, likely to prevent you from launching it accidentally. Still, I would imagine it could become frustrating if you need to take a shot quickly.

As I said before, the camera is centered on the back of the phone, which can be another minor frustration while taking photos - I found that one of my fingers often obstructed the lens. Again, not a huge issue, but it's annoying enough to make you wonder why Samsung didn't choose to put the camera off to one side like many other manufacturers have done.

The camera app is a nice improvement over the stock one - in addition to being considerably easier on the eyes, it has more options, including the following shooting modes:

These shooting modes, along with other settings, are accessible via a tab on the left side of the app to keep the UI from feeling cluttered. The improvements aren't enormous, but the visual tweaks are one of the upsides of being stuck with (often maligned) custom UIs.

Like the rest of the Galaxy S family, the Continuum has an 800 x 480 Super AMOLED screen, though, obviously, it's a bit smaller (3.4" compared to 4" on other models). There's really nothing bad you can say about the display itself - it's incredibly crisp, bright, and colorful. Because blacks are not lit, they are incredibly deep, and I've actually had a few non-techie friends notice it. If you really don't like anything else about the Galaxy S phones, the display could convince you all by itself - it's that great.

Battery life is slightly less than I had hoped, but it's certainly still manageable. With regular usage, you'll probably be able to squeeze a full day out of it, but if you're planning on doing a lot of gaming, you may want to keep a charger handy. The phone does have an ambient light sensor, so if you are really concerned with the battery you can let that decide what's best for you, though I personally thought it was just a tad too dark by default.

Custom Android UIs generally get a lot of crap from the community, and I'm not exactly sure why - their goal is to provide a better experience for the user, and if you prefer stock Android, then you can always download a different launcher or, if you're brave enough, root the device. When executed properly, a custom UI can be a wonderful thing.

TouchWiz does have some very nice benefits over stock Android, but still manages to feel unnecessary and tacked on. To start, the launcher feels like a pale imitation of the iPhone, with side-scrolling app pages and unnecessary colored squares behind each app. This is the one area where TouchWiz performs poorly, and really makes you think that phone manufacturers simply don't know how to do software.

On the bright side, there were a few additions that made the whole phone look a little nicer. The music and video players are visually impressive, as are some of Samsung's widgets.

The lock screen uses puzzle pieces as a mechanism to allow you to quickly open up unread messages or missed calls. Definitely an interesting feature, though it's overall usefulness is debatable. You'll find some convenient service toggles in the notification bar (similar to those found in Google's power control widget), as well as music controls when the media player is running. But with music controls also available in the Ticker (see below) and in another pull down bar within the lock screen, it seems Samsung has made a very simple task unnecessarily complicated. Choice is great, but at some point it just becomes cluttered - it's another indication that TouchWiz lacks the polish of HTC's Sense.

In many phone reviews, it's said that it's getting more and more difficult to differentiate between phones that are dominated by a single screen, and that may be one reason that Samsung decided to make the Continuum. It's still a Galaxy S device, and the addition of the Ticker definitely makes it stand out from other phones. But does it actually make the experience better, or is it a poorly executed gimmick?

I'll start with this: it's a good thing that Samsung has another Galaxy S device, the Fascinate, available on Verizon. The Ticker isn't bad, but it really isn't something you can ignore - any time your main display is on, so is the Ticker. The Ticker can also be activated separately from the main display thanks to the "grip sensor," which is found on the right side of the phone underneath the camera button (how useful this is to you depends on the way you hold the phone).

If you're not a fan of this "second" display, than you'll probably want to pass this phone up in favor of the Fascinate. As much as I grew to like the Ticker, it was fairly annoying when watching movies or playing games. Not to mention that, depending on the way you hold the phone, you may accidentally tap the Ticker settings box, which will interrupt the activity currently in progress by opening up the settings application.

The Ticker has a few main uses: social network updates (Twitter, Facebook, or, for some reason, MySpace), RSS feeds, texts, e-mails, and IMs. These are all displayed in the notification part of the Ticker: by default, it will show you the weather and time (surprisingly useful), and a simple swipe will switch between these screens.

There are three other screens available: the phone screen, which only appears when you are receiving a phone call and are using another application, the VZ Navigator screen, which shows you upcoming directions when navigating (unfortunately not compatible with Google's own Navigation), and the music controls. If I could choose only one use for the Ticker, it would be for music controls - they are amazingly helpful, though they can be buggy at times (see Bugs, below).

Like most Android devices nowadays, the Continuum is filled to brim with bloatware - apps Verizon has pre-loaded that aren't removable without root. These include:

None of these are of any real value, but other than cluttering up your app drawer, they're relatively harmless. There have been a lot of negative reactions from the Android community regarding Bing replacing Google as the default search provider, but it's really not that big of a deal; if you really care, you can always make a shortcut to the mobile Google site on your home screen and download Google Maps to replace Bing Maps.

What concerned me most about the phone was how often parts of the phone would become completely unresponsive. I first encountered this when I initially tested the Ticker's music controls: the play/pause button did absolutely nothing. I was concerned that something may be wrong with the display itself, but it began working after a reboot.

There were also multiple instances where the phone locked up completely, requiring a battery pull. It was a bit disturbing, and I hope that Samsung can fix this with an over-the-air update.

In addition to these, the infamous Galaxy S GPS issue is back. Although it doesn't render the GPS completely unusable, it often took me multiple attempts to get a lock on my location, so you might not want to use the device as your primary navigator. Again, hopefully Samsung is already prepping an update to fix this issue.

The Continuum is really the odd one out in Verizon's line-up of Android phones. With a high-res display and Hummingbird processor, it's definitely a high-end phone, but with a smaller screen and cheap casing, it's built more like a budget phone than anything else. The Ticker makes it even more strange, because you still have a fairly large phone without a 4-inch (or larger) main screen. Still, if you find the Ticker intriguing, I would definitely recommend this phone: the pure speed and amazing display more than make up for the less-than-stellar build quality and bloated software.

Thanks to Samsung and Verizon for providing a review unit!

App Of The Week: Grooveshark For Android (Insert Tooth-Related Or Aquatic Pun Here)