Well, here we are again. Another week, another slew of apps to choose from. For a while there, we were doing an "App of the Week" series and then, for an even longer while, we weren't. I'd like for us to get back on the right path here, so I'm going to fix this.

I've been a long time fan of Grooveshark. It is a service that, in my mind, cannot be beaten. There are tons of music streaming apps in the vein of Pandora, like Last.fm, and Slacker Radio, but they don't let you chose your songs or make a playlist. There are also awesome apps like Audiogalaxy and Subsonic, but they rely on the fact that you actually POSSESS the music you want to listen to. Grooveshark even manages to hold its own against similarly priced streaming music services such as MOG, Napster, and Rhapsody - they lack the option of allowing users to upload their own music, which can be a significant advantage if you're looking for obscure or hard to find tunes that aren't currently being licensed.

Grooveshark is built on a simple premise: type in a song or artist, and voila, you can listen to it. The website alone (which was recently overhauled and re-coded in HTML5 - major props on that, Grooveshark) is reason enough to love the service, but they didn't stop there: they made one hell of a mobile app. You can grab the app in the Android market (or you wayward iPhone users can grab it from iTunes. Also, it's kind of weird that you're here.) although it does require that you're a Grooveshark subscriber. For $9 a month, however, it is a small price to pay for what is arguably the best music streaming service on the internet.

Enough about Grooveshark as a whole, let's talk about why you're reading this: the Android App. It integrates very well with the web app, allowing you access to all of your playlists, favorites, and uploaded music. You can also save music for offline listening. Nice!

Now let's take a little walk-through the app so you can see how pretty and functional it is. I also highly recommend you go to Grooveshark.com and listen to any music you see in the images that follow because I have really good taste in music. Not even kidding.

This right here is the first screen you're presented with: 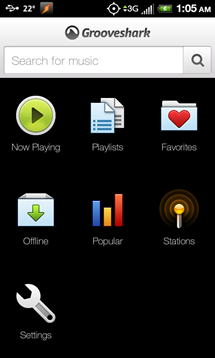 This screen gives you access to everything in the app. The categories are pretty self-explanatory, so I'll just show you pictures of what happens when you poke these things: 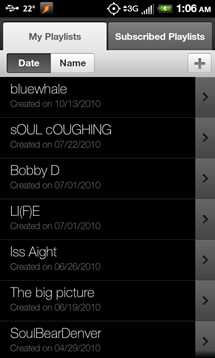 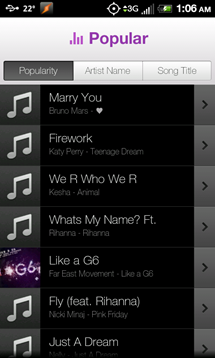 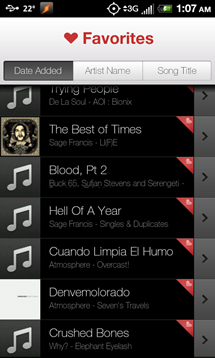 These are, obviously, images of my list of playlists, the tracks that are popular on Grooveshark right now, and my favorites. The playlists have no song limit and I have taken measures to test that. My playlist "The Big Picture" has over 400 songs in it and is growing daily. Also, a lot of the music I listen to is pretty obscure, but 9 times out of 10, Grooveshark will have exactly what I'm looking for. In fact, these playlists and my favorites are the only access I have to many of my favorite songs. It's pretty impressive. 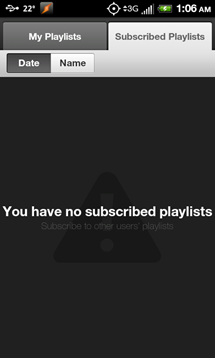 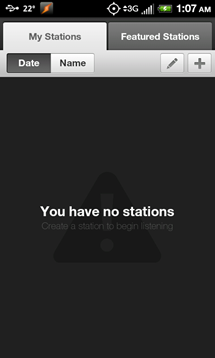 You can also subscribe to others' playlists or create radio stations (a la Pandora or Last.fm) but, to date, I haven't really used these features on my phone. I suppose I'm just too proud to let my phone guess what I want to listen to. Either way, the features work, I just haven't used them in a while. Sorry. 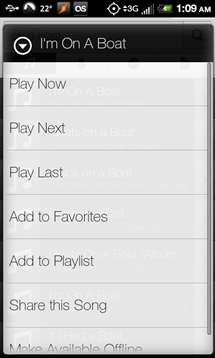 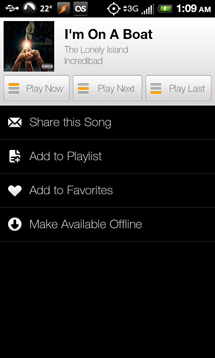 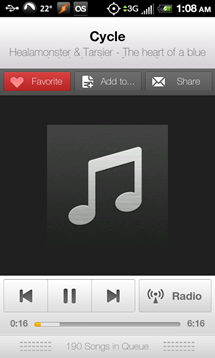 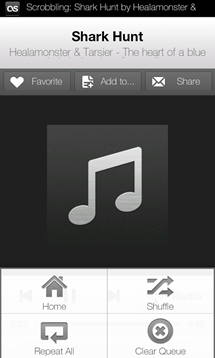 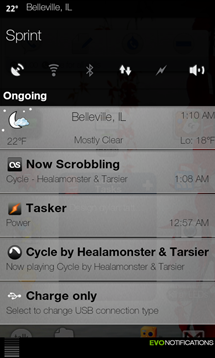 Here are some shots of the context menu that appears when you long press a song - I especially enjoy the offline feature. The "Now Playing" screen would display cover art if the artist I was listening to had cover art, but it turns out they didn't this time. That said, the 'Now Playing' screen is simple and functional, which is all you can ask for, and the ongoing notification is pretty much like any other music players. Note the Last.fm scrobbling, of which I am a fan. I really like the song queue drawer, as well: 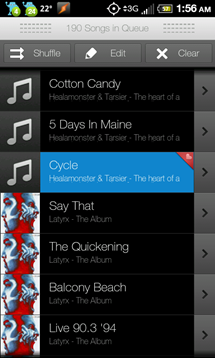 You also get some option to play with, but the app takes care of most things in the cloud: 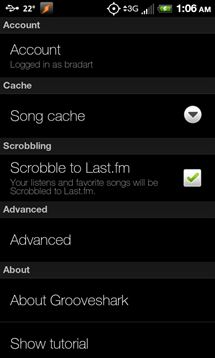 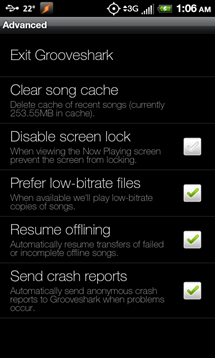 Just like any other music streaming app, low bitrate files will load faster but, as you may have guessed, not sound as good. Unchecking the "prefer low bitrate files" option is best for wifi

Overall, I think the Grooveshark Android app is totally awesome. The sound quality is a lot better than you'd expect from a music streaming app, to the point that it sounds like you have the songs stored locally on you phone. It's really quite impressive and I would easily recommend it to anyone who loves music.

The app is pretty young, though, and there are still some bugs. They've solved the majority of the issues in the most recent updates, but, as with anything written in code, strange bugs will linger on. I often get "Unknown media player error" when fast forwarding which, honestly, is less useful to me than a "check engine" light. How do I react to that? Despite that, the app still definitely holds its own and the Grooveshark team has done some impressive work since the app's inception. If you're not ready to take the dive (see what I did there?) just yet, this is definitely worth keeping an eye on.

You'd be a fool not to grab the Grooveshark App for Android here:

Grooveshark gives you access to millions of songs, streamed right to your phone.

Samsung Continuum Review: Are Two Screens Really Better Than One?