One of the minor things I find annoying about Android is that there's no stock note app. I never understood how all the dumbphones and featurephones I had in the past 5 years had a note "app," but when I upgraded to my first Android device, I was dumbfounded to find that Android lacked anything similar.

I have no problems with apps such as Remember The Milk as they do the task quite well. Still, a recurring cost of $25/yr strikes me as a bit absurd for something so simple - not to mention, I'm a fan of supporting the little guy.

Epistle is a simple text editor that can sync all your notes with Dropbox.

Latest version: 0.1.1 (for all Android versions) 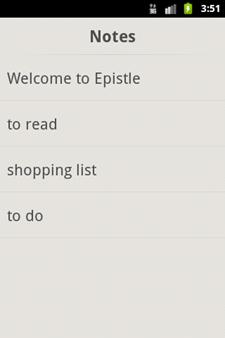 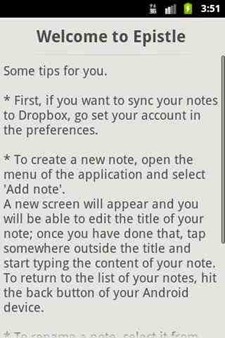 Despite being such an early release, it seems that most of the major kinks have been worked out. The dev has been closely watching the comments on the XDA-Devs thread and the market comments, and has been very quick to address issues.

Sound like your cup o' tea? You know what to do:

The app was not found in the store. :-(
Go to store Google websearch
[Source: XDA-Developers]
subscribe

LG Star Gets Hands-On Test, Dual Core Is No Disappointment