The ViewSonic G Tablet is the most powerful Android tablet on the Market today, sporting a dual core Tegra 2 processor and dominating benchmarks, albeit after some tweaks that turn it into a beast. ViewSonic managed to screw up on the software side, which is fixable by the aforementioned tweaks, but the hardware is top notch, making it one of the hottest tablet gifts this holiday season.

Even at $400 or $380 that Sears has been selling it for, this 1GHz 10" Froyo tablet is a great deal, but this weekend, the price is even sweeter: $350, which is $50 off MSRP. The general consensus at the xda-developers thread discussing this deal is that it is indeed legitimate and available nationwide, but call your local Sears store to confirm. Check out the Sears ad scan below: 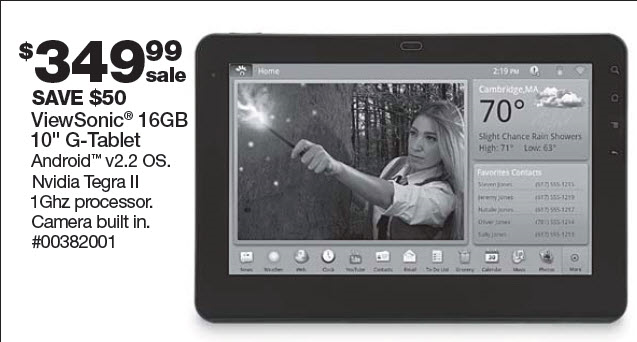 So, who is picking up a new toy?