The biggest change is the ability to render 3D buildings at the street level. Because it will render vectors instead of tiles, maps will supposedly load several times faster, no matter how fast your connection is. Vectors are also easier to store than tiles, which will allow offline caching of maps, even entire cities. Therefore, if you have the entire map cached, you won't even need a data connection to re-calculate your route during navigation - your phone will have all the information already stored. The third and final new feature is compass orientation, which will change the orientation of your map based on the direction you are facing.

Unfortunately, not all Android devices will be able to take advantage of every feature. Here is the list of devices that are completely compatible with the update:

While the fact that the Nexus One is not on the list may be bewildering at first, a trip down memory lane will inevitably bring up the device's multitouch issues, which are reportedly why the phone is not going to be receiving the update's rotate functionality (though it will be seeing all the other features). We just have one more question for you, Andy: how do you define "a matter of days," exactly? 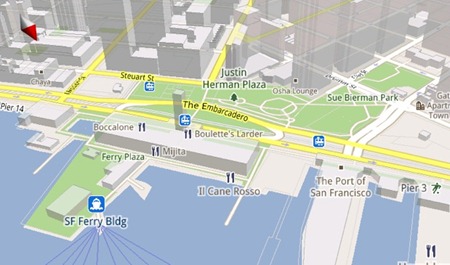