As well as pretty much all the other features you'd expect from a flagship Android device. As many of you have probably already noted, the Nexus S does not have the much-desired dual-core processor that was so highly anticipated, but the specs seem quite solid nonetheless. 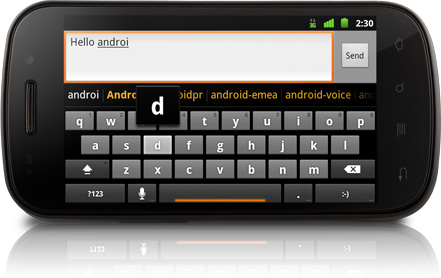 The Nexus S will be available, both off contract and with a two-year T-Mobile service agreement, in Best Buy/Best Buy Mobile stores or online in the USA on the 16th of December. Additionally, Carphone Warehouse and Best Buy stores in the UK  will be selling the device on the 20th of the same month. In the USA, the phone will retail for $529 off contract or $199 on a new two-year agreement, much like the Nexus One. Across the pond, Carphone Warehouse is already listing the Nexus S and its tariff on the Vodafone UK network, with the device coming free on a £35 two-year contract. Not a bad price, you have to admit.

Google also created an advertisement to go along with the release of the Nexus S, showing many of the phone's neat but hardly novel features:

Check out the new Nexus S home page at the source link for more info.

Update: The Nexus S page at Best Buy is now live.
Update: Samsung has just announced that the Nexus S won't be available in the UK until the 22nd, though the off-contract price has been cut to £430. Read all about it in the press release below:

[Updated] Google Announces 2.3 Gingerbread! Here Is Everything You Need To Know

Gingerbread OTAs Not Rolling Out Just Yet - Arriving In The Coming Weeks. Yes, That Means Even ...