As we've all been following the Nexus S over the last few months, inhaling every bit of news regarding its specs, nobody could have foreseen or even considered the fact that the next Nexus, announced earlier today by Google, will be lacking the microSD card slot. The absence of HSPA+, a dual-core processor, HDMI, an 8MP camera, or Bluetooth 3.0 - sure, these are unfortunate, but understandable.

However, not being able to change out one SD card for another, faster one, is beyond mind boggling. Given that the Nexus S comes with 16GB of built-in storage, I personally probably won't suffer too much from this, but I imagine there are some of you who would want to upgrade to a larger card (to store more music) or to swap out your existing cards between multiple phones. Was the decision guided by the complications behind the physical device design? So far, we don't know, but I hope Google will explain in the near future.

In response to our question, the confirmations came from Romain Guy and Reto Meier, who are both Google Android engineers: 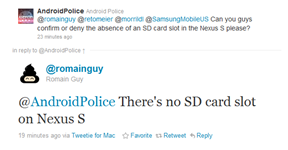 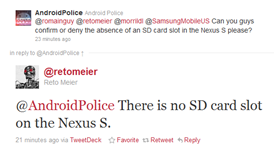 Update: the official Google phone comparison tool shows "None" in the Removable storage field, yet again confirming the above.

Interesting move, Google. Now, how many of you will really miss the SD card slot?

Walkthrough And Hands-On With The Gingerbread UI And The New Gingerbread Keyboard In All Its ...