Verizon's long-awaited 4G LTE service, promising speeds of 5-12 Mbps down and 2-5 Mbps up, is launching in 38 major metropolitan markets and over 60 airports today (get the full list here). Since no LTE-capable mobile phones exist on VZW just yet, the only way to experience LTE on the move is by getting 1 of 2 (soon to be 3) 4G USB modems. Unlike Sprint's truly unlimited 4G plans, Verizon's plans carry a data cap: $50 for 5GB or $80 for 10GB, with a $10/GB overage fee. Additionally, Mac OS X support has been left out for now. Not the ideal situation, but if you need 4G speeds and want to go with Verizon, you don't really have any other choice.

The 4G modems, LG VL600 and Pantech UML290, both of which are available at VZW starting today, will run you $150 each after a 2-year contract, with a $50 discount if purchased online at VZW.com. If you don't like contracts, you can purchase the modems at their full retail price of $250.

Alternatively, rather than paying $150 and fiddling with the rebate, you can pick up the LG VL600 at Wirefly for free: 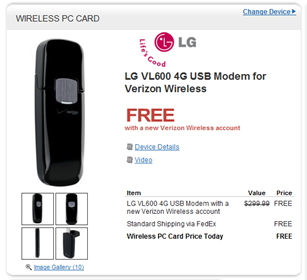 So, does the LTE network trump Sprint/Clear's WiMax? How are those modems currently performing? While I don't have Verizon service myself, I can point you in the direction of some people who have conducted some tests:

The verdict? Fast, at least while nobody is on it, but expensive as hell. One thing's for sure - Verizon won't be seeing any of my money, at least not until the data cap is gone. And by the time LTE-enabled cell phones roll around in 2011, we better see some more attractive price points in the plans department - after all, Sprint's unlimited 4G privileges are only $10 more than 3G.

So, who's jumping on LTE today? Is it going to be more than just crickets?