Every few months, our pal Daniel Ruby, research director for ad firm Chitika, takes a look at the market capitalization of Android devices. As of early November, the original Motorola Droid still holds an astounding lead in the market with nearly 19%. The HTC EVO 4G checks in to second place with 12%, followed by the Droid X at 10%. The Incredible (7%) and Vibrant (5%) round out the top five. 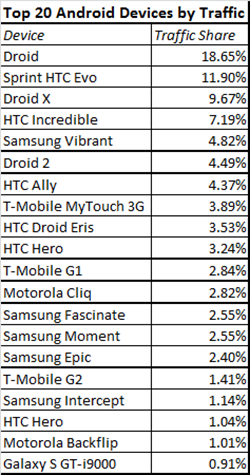 It's impressive to see that the Droid still has such a massive hold on the market, especially since it's been discontinued for a few months now. At the same time, that hold has fallen from the pant-crappingly high of 34% we saw back in June. In fact, it's surprising it hasn't fallen more, given that the market is a lot more crowded now and Android has continued to pick up steam since then. 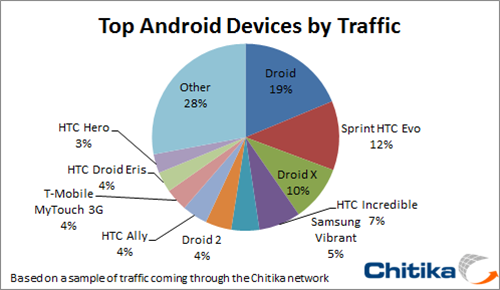 Two things of note: the HTC Hero appears twice in the Top 20 list, and the "HTC Ally" is 7th place with 4.37% - I'd assume that's the LG Ally. I've pinged Dan for clarification on both points, and will update when we hear back from him. Good God the man is fast... the Hero appears twice because there are two versions - Sprint and Cellular South. Also, it is indeed the LG Ally - that was just a typo on his part.