Prev
Posts in the last
24 Hours
sorted by
Hottest
Next
Update: Looks like it's not We're not sure if it's the Flash update that does it - that was just a coincidence for Brian and utcarbs (update: And Bateluer in the comments). We're also not sure which phones this is affecting... I've tried updating Flash on my EVO, as well as uninstalling and reinstalling, to no avail. --Aaron
Update #2: As I expected, this is definitely not related to Flash. I updated Flash yesterday and didn't get the new tab. Today, I updated some random programs and the tab showed up. I'm pretty sure the Market UI is server-side, so checking the Market app's version does not help (my /system/app/Vending.apk is 1.82). I suspect all it takes for the switch to be flipped is some metadata change somewhere where the Market stores it, triggered by a random app update. --Artem
Update #3: Try this solution to force the new tab to show up.

As you may have noticed in the Gingerbread video found earlier on the Google Hong Kong account, there was a new tab in the Android Marketplace showing similar applications. We presumed it would make an appearance with the release of Gingerbread itself, but an XDA member noticed that they had it on their own Nexus One, running CyanogenMod. The poster, utcarbs, had just updated his Flash Player to the latest version, which seemed to trigger the tab's appearance. Having just done the same process on my own Nexus One, I can confirm this new feature's availability: 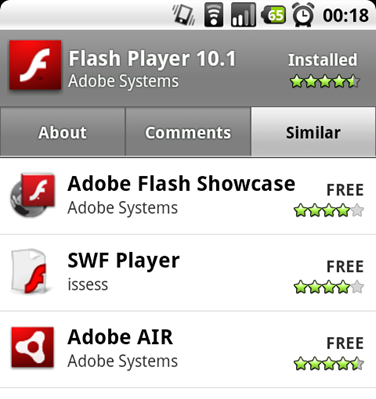 Flash Player was updated only 6 hours ago according to AppBrain, so there will be plenty of Android 2.2 users out there yet to grab the latest version. Go out there and get it guys, and let us know if the Similar tab is appearing for you too.

DryCase Review: Keep Your Electronics Dry At The Beach. Or The Bar

Kite UI Is The Next Mind-Bending Android UI Concept, Looking For More Coders