As expected, today Verizon Wireless officially unveiled its plans to light up more than 1/3 of America with the next generation 4G LTE network. The switch will be flipped this Sunday, December 5th, but since VZW doesn't have any LTE-enabled mobile phones just yet, the only way to get a taste of the new network will be using one of the two USB modems VZW will be offering: the LG VL600 or the Pantech UML290.

The coverage area is pretty impressive, considering this is the first time LTE will be rolled out in the US - 38 major metropolitan areas and over 60 airports, which is pretty much unchanged from our report in October (see the full list in the PR at the bottom of this post). 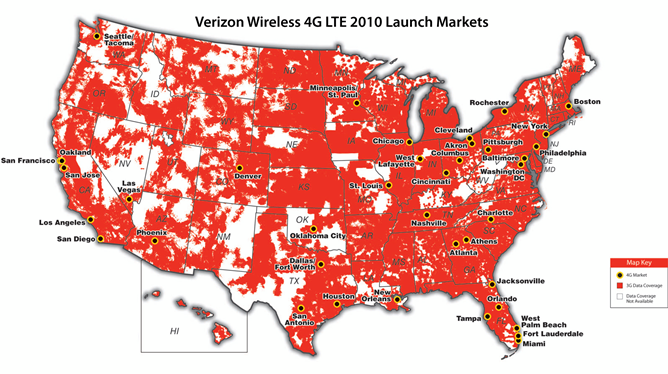 What's not so impressive are the data plans:

Each additional GB will incur a $10 overage charge. To say that these plans are ridiculously overpriced would be a gross understatement. This puts the extra $10 fee for using 4G devices on the Sprint network in a whole new "this was actually pretty cheap" light. Sure, Sprint's coverage may be spottier (though this still remains to be seen) and, perhaps, slower (which also remains to be seen), but paying $80 for a measly 10 GB does not fold up in my head at all.

Real-world LTE speeds are expected to be between 5 and 12 Mbps down and 2-5 Mbps up, but we, the consumers, will be making the final call on that.

As far as LTE-enabled handsets, VZW put down mid-2011 officially, but according to some of the rumors we've seen in the last few months, they may be arriving much sooner - possibly as early as January, barring any complications.

More news about LTE can be found over at the LTE Info Center and the customer-facing, more fun, Flash-enabled VZW LTE site.

What do you think about today's announcement? Am I overreacting with the pricing structure? 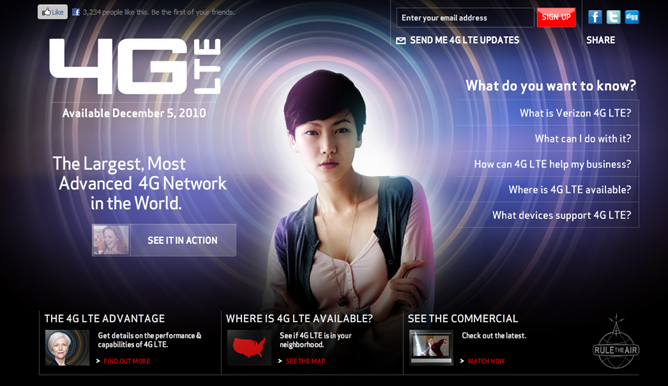 BASKING RIDGE, N.J. – Verizon Wireless announced today it is turning on the world’s first large-scale 4G LTE network on Sunday, Dec. 5.  Verizon Wireless’ 4G LTE Mobile Broadband network will be the fastest and most advanced 4G network in America.  Business users will be the first to take advantage of the 4G LTE network with speeds up to 10 times faster than the company’s 3G network.

Dan Mead, president and chief executive officer of Verizon Wireless, said, “Beginning Sunday, Verizon Wireless is making the best network even better.  Our initial 4G LTE launch gives customers access to the fastest and most advanced mobile network in America and immediately reaches more than one-third of all Americans, right where they live.  That’s just the start.  We will quickly expand 4G LTE, and by 2013 will reach the existing Verizon Wireless 3G coverage area.”

Road warriors using laptops will immediately benefit from Verizon Wireless’ 4G LTE Mobile Broadband network with super-fast connectivity that’s up to 10 times faster than the company’s current 3G network.  The company expects 4G LTE average data rates in real-world, loaded network environments to be 5 to 12 megabits per second (Mbps) on the downlink and 2 to 5 Mbps on the uplink.

Mead continued, “We are building our 4G LTE network with the same commitment to performance and reliability for which we have long been recognized.  Our commitment to superior network performance, combined with broad 4G coverage areas and the strong value of our data plans make 4G LTE Mobile Broadband the best choice for laptop users.”

Verizon Wireless customers can choose from two 4G LTE Mobile Broadband data plans: $50 monthly access for 5 GB monthly allowance or $80 monthly access for 10 GB monthly allowance, both with $10/GB overage.  For laptop connectivity, two 4G LTE USB modems will be initially available: the LG VL600 is available at launch and the Pantech UML290 will be available soon, each $99.99 after $50 rebate with a new two-year agreement.  Both USB modems provide backward-compatibility with Verizon Wireless’ 3G network.  If laptop users travel outside of a 4G LTE coverage area, they will automatically stay connected on the company’s 3G network.

The two modems harness the power of the company’s 4G LTE Mobile Broadband network to help enterprise, business and government customers make their workforces more productive, providing super-fast laptop connectivity.  Both modems will be available in Verizon Wireless Communications Stores, online at www.verizonwireless.com, by phone by calling 1-800 256-4646 and through the company’s business sales channels.

The company expects consumer-oriented handsets will be available by mid-2011.

Verizon Wireless’ 4G LTE Mobile Broadband network is initially launching in 38 major metropolitan areas and in more than 60 commercial airports coast to coast – at both airports within the launch areas plus airports in other key cities.   Street level coverage area maps will be available online on Dec. 5.  Today, customers can go to www.verizonwireless.com/4Glte to check if their addresses will be in the initial 4G LTE coverage area.