While we originally heard that AT&T would start selling the dual-core Motorola Olympus by the end of January, it now appears that the phone may be available earlier - according to a Facebook message which has since been deleted (see below), the handset may go on sale as early as December. Unfortunately, AT&T, who posted the message, later stated that "we don't have any information to share about upcoming devices" and that the message was posted "erroneously," so not much else came out of the leak. Still, here's what we do know: we're looking at a Tegra 2 handset that will most likely feature a front facing camera, a relatively slim profile, and a display in the 4-inch range. While we do not yet know whether the device will ship with vanilla Android or not, let's all hope and pray that Motorola's skipped the custom UI this time - it would be really disheartening to see both the Olympus and the LG Star ship with one. 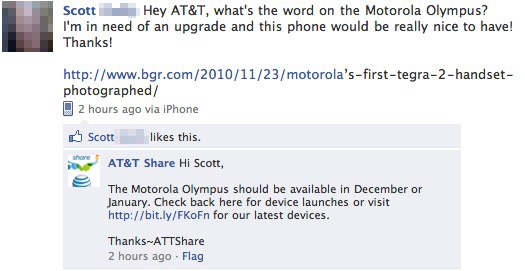