According to multiple sources, Acer is planning a special event tomorrow in New York to announce three tablets - one 5-inch (not much is known about it), one 7-inch (is expected to run Android 2.2), and a 10-inch (is expected to run Windows 7). Acer showed off a tablet several months back with a front-facing keyboard with a 7-inch screen; there's a good chance this is the same product but with some revisions.

The 7-inch tablet looks somewhat like a Kindle, mostly because of the front-facing physical keyboard, and could possibly be launching sometime before Christmas. It was also rumored to be running on the Tegra 2 processor with Android 3.0, but its release has been hastened in order to compete with the Galaxy Tab.

According to mysterious sources cited by Digitimes:

Acer has two internal opinions about the debut of Android tablet PCs, one is to delay the debut until after Gingerbread (Android 2.3) and Honeycomb (Android 3.x) are launched, the other is that an early debut will help compete with Samsung Electronics' and Toshiba's Galaxy Tab and Folio 100.

It'd be nice to see an Android tablet with the Tegra 2 processor launch here in the States, but there's no word on Android Market access, which has quickly become one of the important issues an Android tablet has to deal with. As for the 10-inch tablet, I would venture to guess that it will indeed run Windows 7, and the 5-inch "tablet" will likely see the same path as the Dell Streak (i.e., it's a giant phone). But who knows, maybe Acer is prepping its own awesome, 10-inch Android tablet. 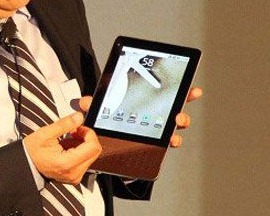 via Android And Me

T-Mobile Announces A Buy One, Get One Free Holiday Smartphone Promotion