While everyone in the U.S. is awaiting the Black Friday, the largest retail event of the year, RadioShack decided to start the party early and is kicking off its own event called Shack Friday.

Mirroring Best Buy's and Office Max's Black Friday deals, The Shack will be offering Sprint's version of the 7" Samsung Galaxy Tab for $50 off retail, which means you can pick up the device on contract for $349.99. Unlike Best Buy and Office Max, however, The Shack's sale starts early: tomorrow, November 21st and lasts through November 24th.

The promotion does not mention whether the discount will apply to the off-contract $599.99 version, which, frankly, makes a lot more sense to me than having to pay $30 a month for a data plan on contract.

Give an exciting on-the-move digital experience with the Samsung Galaxy Tab from Sprint, available at select stores for $349.99 (Reg. $399.99) after $50 instant savings with new two-year Sprint agreement on tablet plan starting at $29.99 per month.

This Android-powered tablet makes entertainment on the go light and portable with features like Daily Briefing, optional Mobile Hotspot, an expandable memory, Allshare DLNA Technology for sharing photos and video, and 4,000-mAh battery. 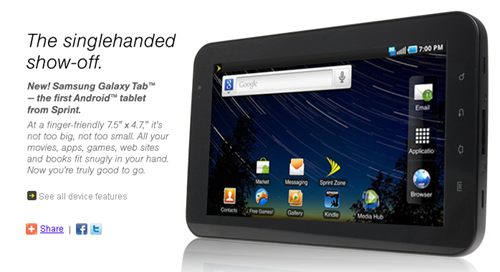 Sprint's HTC Knight To Be A WiMax QWERTY Slider?