What a nice surprise to come home to: Samsung was kind enough to send us the T-Mobile variant of the Galaxy Tab, and boy, is this thing beautiful. So far, I've only had about 30 minutes to play with it - just enough time to setup my email and preferences, do a little web browsing, and, naturally, play a game of Angry Birds (or 5... you know how it is). 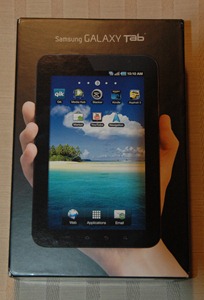 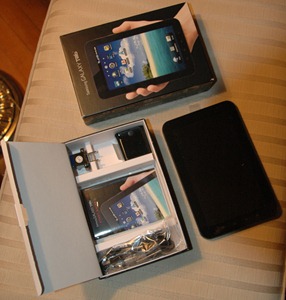 Obviously, I only have limited impressions and a gaggle of pictures thus far - but the full review should be forthcoming in a few days, so be sure to check back. 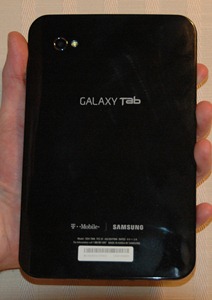 The build quality here is absolutely top notch. Keep in mind that the Tab doesn't have a user-removable battery, so it more or less feels like a unibody device (though it's technically not). It's not heavy, but it's certainly not light either - in a good way; in other words, it doesn't feel like it's going to fall apart, but it's no brick... it just feels solid.

The buttons are well placed and firm - very similar to what you'd find on an EVO or a Droid X, for example. They protrude ever so slightly so that you can find them by touch, but they are also firm enough that you're unlikely to accidentally bump them. Both the power and volume buttons are on the right side, as are the SIM and microSD slots. The headphone jack is up top, and the microphone hole is on the left. You'll find the speakers and the charging port on the bottom of the device.

As for the screen, it's absolutely gorgeous. Bright, crisp, vibrant - it's everything we've grown to love about the displays found in the rest of the Galaxy devices, just enlarged and higher resolution. One caveat, though: there's a visible banding problem on the 3 homescreen buttons (Email, Applications, and Web - bottom of the screen in the picture below) when in landscape mode; the highlight along the top isn't smooth, but rather 3 bands of shades of gray. It doesn't show in portrait, and I have yet to see it anywhere else, so it may just be a problem with finer shades of gray - or it may just be my review unit. 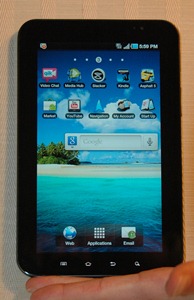 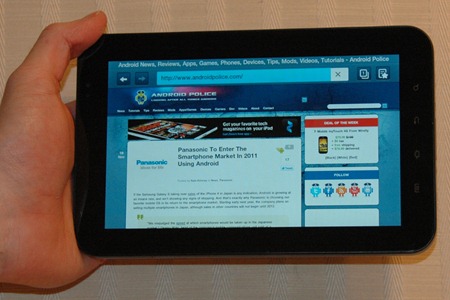 This is my first experience with a Galaxy-series device, and I have to say, wow: the infamous lag problem really is pretty ridiculous. Using the phone is a lot like Two-Face: half the time it's excellent, and half the time it's frustrating as hell. For example, the device scrolls through screens or apps without even a glimmer of a hiccup, but open the web-browser and it's like using a Windows 95 PC with a virus. Tap the address bar, wait a few seconds until it's editable; wait another few for the keyboard to appear. On the bright side, there's an iOS-like animation when you rotate the device while browsing the web; on the negative, it stutters and makes the site you're browsing look like crap for a few seconds. Loading webpages also seemed to be slower than it should be, although I have yet to use WiFi, so that may be an issue with T-Mobile rather than an issue with the Tab.

I know some people hate manufacturer UIs, but frankly, I think they can be alright. I have no real problem with HTC's Sense UI, and Samsung's TouchWiz (used here) doesn't seem bad at all. Keep in mind that Android wasn't designed for larger screens, whereas this UI was. For example, when used in landscape mode, Samsung's Email app breaks into two sections - a preview pane and an email list pane (similar to Outlook). It's a minor touch, but both boxes are large enough so that you never have to switch to just one or the other.

That's about all I've got so far. Despite the serious lag issue, I'm still very impressed with the Tab. I'll definitely be carrying this with me everywhere I go for the next few days and using it for everything but phone calls, so I should have a pretty good feel for it by the time I sit down to write the review.

Samsung Developing Google-Powered TV Of Its Own, Planning On Unveiling The Product At CES 2011