Papaya Mobile, the maker of the popular Papaya game and the social SDK behind it, today announced the upcoming release of the Papaya Game Engine for Android. The new engine is completely free to use and offers a number of benefits to developers looking to write Android games. It isn't available for download just yet, but it should be available shortly.

Before I proceed to the features, have a look at this quick video showing Papaya's 3D aquarium developed using the new engine in about 2 weeks.

So what are some cool things about the new engine?

So, how hard is it to create an application using Papaya's new engine? According to the company, not too long at all:

It takes 5 minutes for a programmer to learn how to code a simple game following the tutorials.

It takes 1 week for a programmer to become very familiar with the game engine and begin to code sophisticated social games.

It took 2 weeks for one Papaya engineer to code Papaya Fish 3D!

Not too bad. You can read more about the new engine at the company's site here. If you are waiting to sink your claws right into the juicy bits, you will have to wait a bit more, as the download link is currently listed as "Coming Soon." 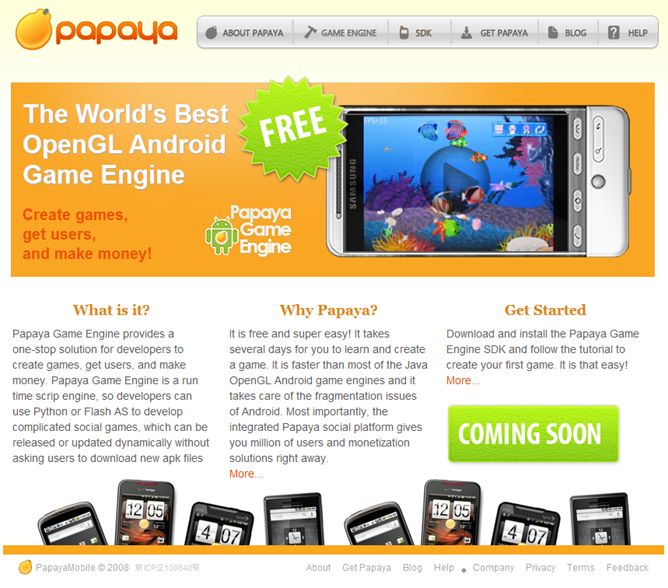 Full press release is available below:

Core News Facts:
•       PapayaMobile, a leading mobile social platform for Android apps, today announced Papaya Game Engine for Android: A free, Open GL run-time script game engine that is a user-friendly, straightforward way to develop games and reach Papaya’s 4 million global users via viral marketing and cross promotion.
•       The Papaya Game Engine is:
o   A one-stop destination for developers who want to make cool Android games without having to learn the complexities of the Android API or wade through the fragmented Android market
o   The first run time script engine written in C on Android with performance significantly faster than other Java based game engines
o   A way for developers to write complicated, high quality Android social games using Python or Flash like script language
o   A platform that allows for release and regular update of games directly through Papaya’s network, so users never have to download new apps
o   Combined with Papaya’s billing system to provide a complete solution for game developers to not only gain exposure, but to instantly monetize and integrate virtual currency, offer-based ads and a comprehensive set of billing channels
o   Integrated with Papaya’s social features – like challenges, avatars and LBS – to offer deeper user engagement
o   Easy to use and master – it takes a programmer five minutes to learn and sophisticated games can be created within one week.
•       Papaya’s Game Engine offers automatic Android device detection/adaptation and features that make developers’ lives easier:
o   Compact and lightweight
o   Dynamic type and object oriented
o   Native view UI
o   Resource caching management
o   Python/Actionscript like syntax that is very easy to learn
•       To make your game using the Papaya Game Engine, follow the tutorial at:  www.papayamobile.com/engine.

Quotes:
Attributable to Si Shen, Co-Founder and CEO, PapayaMobile:
“The Papaya Game Engine is intended to help developers gain maximum return on investment for their game titles. We know the pain developers experience as they create mobile games from the ground up or port them from other platforms. Our game engine significantly reduces the time and resource investment to do this while also exposing a developer’s game to the most diverse monetization channels possible.”

Attributable to Wenjie Qian, Co-Founder and CTO, PapayaMobile:
“We spent many years developing this technology and the amount of wasted time we can cut out for game developers makes this launch extremely gratifying.  It used to take months for developers to make social games on Android. The Papaya Game Engine will change the way developers make games and mean at least 50 percent less time spent on backend repetitive tasks so developers can focus on creation and iteration.”

Panasonic To Enter The Smartphone Market In 2011 Using Android