As we mentioned over the weekend, the UK Dell Streaks were on the verge of finally getting that sweet, delicious Froyo upgrade, and now we are able to provide the rollout schedule in more detail.

Starting November 15th, which is pretty much now, carrier unlocked devices will start to receive OTA (over-the-air) notifications allowing the Froyo update to be downloaded and applied. Carrier locked Streak OTAs will follow later on in December due to having to jump through extra hoops, i.e. the carriers, before any updates can be allowed to trickle in. Your Streak will check for a firmware update upon boot but you can force the check manually by going to Settings > About > System Updates.

Phase 1 : Beginning today, Monday, November 15, 2010, an OTA update will be available to customers who purchased their Streaks as unlocked units. These units will be upgraded first because they do not have to go through the carrier approval process. Unlocked units are generally popular outside the United States and can be identified by the fact they are able to be used with a SIM card from any carrier network. The rollout of the upgrade will be gradual with different regions and versions of Donut and Éclair updated over the weeks following November 15, 2010. When a user’s device is ready for an update, the user will be notified by an update icon in the notification bar after a power up. A user can also manually check for an update by going to Settings – About Device and selecting System Updates. Devices ready for update will then be taken through the update process.

Phase 2: Starting later in December, users on devices locked to a specific carrier (i.e. you can only use your carrier’s SIM in the device) will start seeing updates as we work with our carrier partners for technical approval.

Dell Streaks will receive an Over-the-Air (OTA) update which will appear in the form of a notification page. Although you will receive the notification while connected via WiFi OR over a Mobile connection, it is highly recommended that you switch over to a WiFi connection during the actual update.

Much of the rest of the instructions includes a detailed Backup and Restore guide, which is apparently needed for this update. Seeing how it is a pretty major upgrade, I would go ahead and follow the instructions if I were you.

What's New in this Update?

One of the changes following the 2.2 Update is that the Dell PC Suite will no longer be supported. The Dell Mobile Sync software will be the new version of Streak sync software and must be downloaded from the Dell support web site. Use Dell Mobile Sync powered by Nero to manage & sync your media & Outlook contacts with your PC.

The new Dell Stage Interface, which is a set of widgets that brings your data and content such as music, photos, and email to your fingertips. If you haven't seen Stage, take a look at this post from Jenn K. Lee over at StreakSmart.

Good luck during your update! 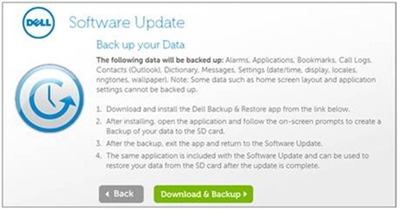 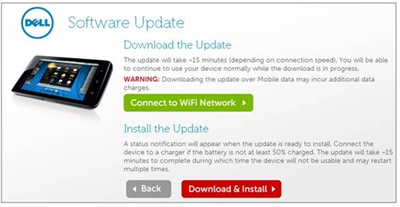 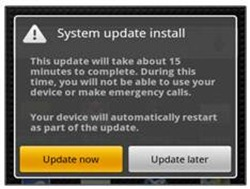