Looking back at the last SDK release, which happened on May 20th, 2010 after the Google I/O conference (this is the SDK itself, not its source - that was released later), the accompanying ADT 0.9.7 got released on the next day, May 21st, 2010. See a pattern here?

Oh, and one more thing: Froyo (Android 2.2) is internally known as SDK v8, and Gingerbread is going to be v9. 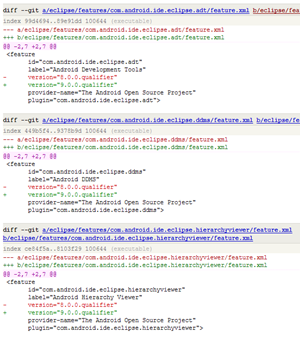 ... and so on - it keeps going, updating the versions of major ADT files from 8 (or sometimes 1) to 9. This can only mean one thing, in my opinion, and that is the Android team is locking down the features that will go into the next version of ADT and readying for the Gingerbread release.

Now, we know Eric Schmidt yesterday said Gingerbread was arriving "in the upcoming weeks," but who's to say we won't see an early surprise soon? I don't know how soon, and only a select group of people does, unfortunately, but I can almost smell it now. Again, these are all my speculations, and none of this may end up making any sense at all, but my developer instincts are telling me something big is close. I ran my speculations by Paul O'Brien, but we didn't arrive at anything conclusive.

tl;dr: Android Development Tools may be suggesting an imminent Android Gingerbread SDK release (that is my speculation).