AT&T isn't exactly known for fair pricing schemes - just take a look at their monthly service plans if you need any evidence of that - but frankly, if this latest rumor proves to be true, they've just crossed the line. 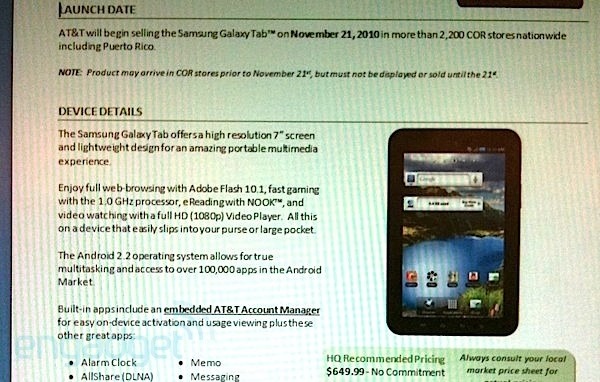 At $649.99, AT&T's Galaxy Tab will be about $20 more expensive than the carrier's 16 GB 3G-capable iPad and $50 less affordable than the off-contract options offered by the three other nationals. Additionally, a November 21st launch date doesn't exactly add value to this package, and the fact that AT&T won't be offering an unlimited data plan of any sort (instead, you'll be coughing up $14.99 per month in return for 250MB of data or $25 per month for 2GB) doesn't help either. But hey - at least you get the Nook eReader and the AT&T Account Manager app pre-installed out of the box. Because who doesn't love bloatware?