Verizon's announcement of a separate Big Red branded Android Market, called the V Cast App Store, sent shockwaves through the Androidosphere a month ago, with the general consensus being: "we don't want it." Of course, none of us could actually prevent Verizon from fragmenting our Market situation further (they've already done their part with the MOTOBLUR to help fragment the Android OS itself), so all we have to do is go with the flow and see what exactly Verizon's cooked up.

Rather than wait for the official release, the folks over at TalkAndroid have got their hands on the installable APK ripped out of the latest Droid Incredible OTA a few days ago. Because Verizon never actually set it live, the app store itself hasn't been very interesting in its sleeping state, presenting us with this nice error message: 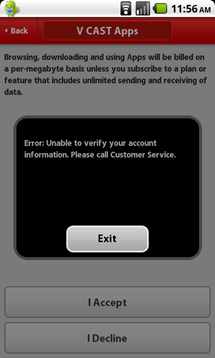 According to TalkAndroid, today, however, the store finally became alive, as evident from this new screenshot: 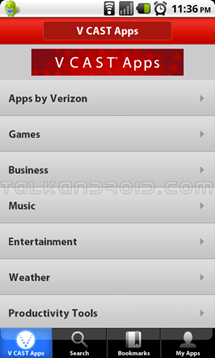 I cannot comment on the breadth of the app selection or the interface, as I don't own a Verizon phone (and I'm not in a hurry to ogle at that ugly red banner), but those of you with the Droid variants may want to check it out and report back with your findings.

With Amazon's plans of rolling its own store, and today's rumors of HTC doing the same, soon enough we'll be asking "which store should I be looking at?" when hearing about a new app, and that makes me sad. Hands off our Market, you vultures!

Grab the APK from our mirror right here: MultiUpload, then copy it onto your phone and install via a file manager like ASTRO.

T-Mobile G2 Now Has Permanent Root, Desire Z And Desire HD Come Along For The Ride