As the Android platform celebrated its 2nd birthday last month, I thought now would be a good time to take a step back and look at all the music players available on the Market right now. Only a year ago, there were just a couple of worthy contenders, but now we have a choice of more than a dozen very good and popular apps and a few hundred not so popular ones. It's easy to get lost, isn't it?

What I'm looking for is not just a vote for the best app but also your reasoning for why it deserves to be #1. What does it do that others don't? Why do you think its implementation is the best of the bunch? I encourage you to not leave this page without explaining if you cast a vote.

I'll go first. For a long time, my favorite player has been TuneWiki due to its ability to play Shoutcast streams (meaning online radio). However, lately, it has been stuttering and dying a lot on my EVO, so I abandoned the idea and switched to playing local music with Winamp.

I was extremely excited about Winamp when it was released, but it got quickly trumped by a new and completely unexpected player ("player" pun intended) called PowerAMP (post #2) by an unknown Russian developer Max MP. PowerAMP still tops my personal chart to this day.

Why do I love PowerAMP so much? It has a gorgeous interface, an equalizer (it really does make a difference), and flawless headset button control, including something I've never seen implemented before - the ability to skip to the next song upon a long press of the headset button. To me, personally, that last feature is worth the most, as I can now move on to the next song while biking by just tapping my cord (FYI: these are the earphones I use: Ultimate Ears TripleFi 10vi). 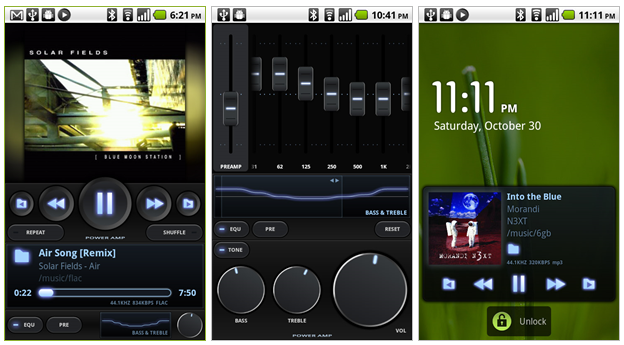 Now it's your turn. What is your favorite music player and why? Cast your vote and proceed to the comment zone.