In what is certainly a grade-A dropping of the ball, it looks like somebody accidentally pulled the trigger on a post at PayPal's Blog before it was time to. We say accidentally because the post read:

... reporting from Innovate 2010. Today, Google announced that you can use PayPal to buy apps on their Android Market.

The only thing is, at the time the post went live, no such thing had been revealed yet - whoops. The post was quickly pulled, but thankfully Google Cached it - and just in case that somehow disappears, we've got a screencap of it right here: 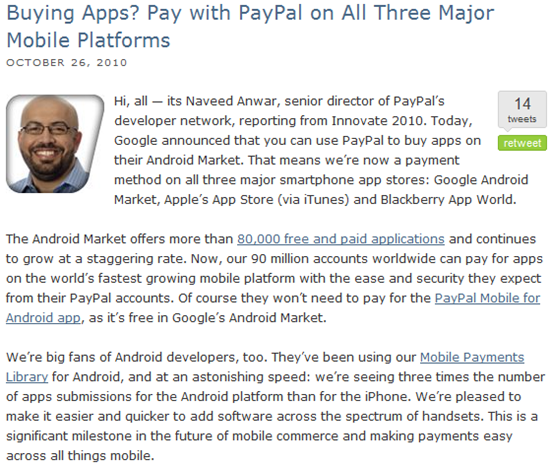 This should be good news for developers and users alike from unsupported countries, as many have complained about issues with Google's current setup. Also surprising is that PayPal is seeing three times more Android apps submitted than iOS. Huzzah!