I think Google jumped the gun a bit on this one, but hey, if everyone is rolling with it, we'll go with it too. The @AndroidDev twitter account, which publishes official Google Android updates, this morning tweeted that the Market finally reached 100,000 applications:

You may remember we've already made an announcement of 100k back in July and may be wondering: "wha...who...why"? Well, that announcement was made by AndroLib, an unofficial market tracker that uses multiple sources (marketplaces) and includes removed apps into the count. Today's announcement comes from the most official of sources, so I'll get the Champaign ready.

Even Andy Rubin himself dropped the 100,000 figure in this New York Times mention, but according to what I've so far considered a reliable method of calculating the exact app count, we're still about 200 apps away: 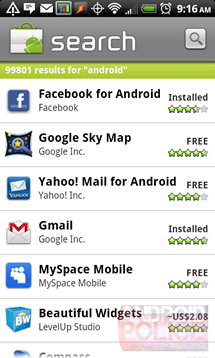 For all I know, though, this method may be using some cache, so I'll go ahead and join the celebration by saying: "Congratulations on this important milestone, Android! You've definitely grown up in the past 2 years."