His first point: Canada only received paid market support just a few weeks ago. In fact, he created Speed Bones nearly two years ago, before realizing that the Market didn't yet support paid Canadian apps. As a result, he opted to port the app to iOS (which forced him to purchase a Mac Mini - way to go, Google). As a result, he only released Speed Anatomy on Android about 6 months ago:

... tired of waiting for Google, I released Speed Anatomy for free on Android supported by an Adsense banner. I would release the more advanced versions, Speed Bones MD and Speed Muscles MD when Google opened it's store to me. [sic]

The result: the game received more than twice as many daily downloads as its iOS counterpart. That said, the Android version was free (ad supported), while the iOS version was paid. Initially, this wasn't a problem for revenue - AdSense was still in private beta, and the CPM was high enough that revenue from the free version was healthy. Or it was, until AdSense went public - by Benoit's estimate, ad revenue fell to 1/5 of what it had been during the beta.

While he wasn't thrilled about the sagging ad revenue, he expected that the free Speed Anatomy app would build awareness and demand for the launch of Speed Bones and Speed Muscles. As it turned out, not so. While Speed Anatomy has nearly 400,000 downloads, Speed Bones and Speed Muscles have less than 500 purchases each.  As a result, revenues thus far are about half what they are for the iOS versions. Discouragingly, revenues for the paid apps have been declining as well: 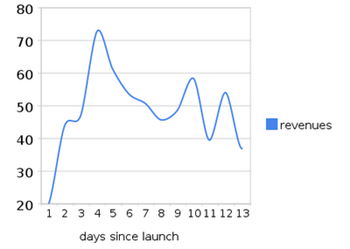 Benoit isn't quite sure why the app isn't doing nearly as well on Android, but he has a few possible factors in mind:

The picture gets uglier still: the Android Market doesn't deduct sales taxes,  which means that come tax season he'll have to get an accountant to run all the numbers and figure how much he owes.

The end result is that his revenues with the Android Market are about half what they are in the App Store, and he spends about twice as much time providing support to users. In fact, the only silver lining is that the update system is instantaneous. Nice? Sure, but it probably doesn't make up for the shortcomings.

Still, at the end of the day, you can't argue with the fact that the popular movement among users and developers alike is towards Android. Even Benoit himself never once bashes the Market or praises the App Store - he simply states the facts and why he thinks things are the way they are.  It's certainly an interesting read (if you're in to that sort of thing) - but hell, it looks like his whole blog is full of interesting thoughts from a developers standpoint.

EA Acquires Chillingo For $20 Million - Chillingo To Give A Damn About Android Again?