I installed the new app on my EVO 4G without a hitch and tested video calling with a PC version of Yahoo Messenger 10 on my Windows machine. The video call connected instantly and with no problems. Mind you, I tried both WiFi and 3G and had the same positive experience.

The app lets you switch between the front-facing and rear cameras with a press of the Flip button, and you can put the caller on hold by pressing Hold. The video of yourself shows up in a small rectangle on the bottom right, with the rest of the space occupied by the other party. Unfortunately, I don't have a camera connected to my PC, so the video was only going one way.

The top 3 screenshots showcase the Yahoo Messenger Android app, while the last one shows what I was seeing on my PC. Interestingly enough, the video coming out of the 1.3MP front-facing camera was sharper than what I was seeing from the rear 8MP one. Either way, it was pretty highly compressed - Yahoo clearly went for speed and lack of lag at the expense of quality. Turning on WiFi didn't change the quality - it was still pretty washed out. 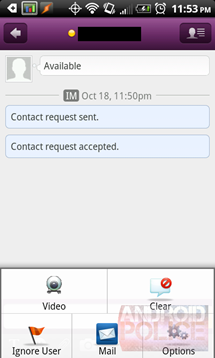 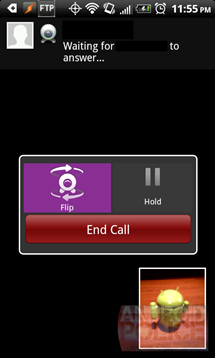 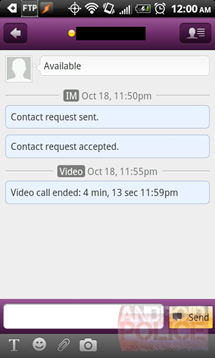 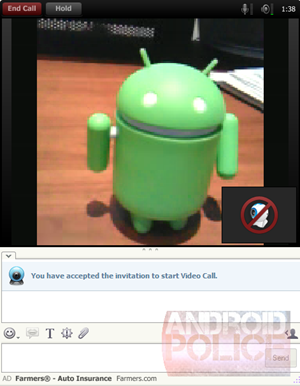 The Yahoo Messenger Android app actually consists of 2 parts: the app itself and the video add-on.

If you have an xda account, you can download everything from the original forum thread; otherwise feel free to use Android Police mirrors below: