You may have read or heard some of the choice words directed by Steve Jobs towards Android yesterday, in Apple's Q3 Earnings call. Today, in a completely unrelated development,  Mr. Andrew Rubin joined Twitter and made it quite clear what he thought of the matter. Clear, that is, if you understand bash: 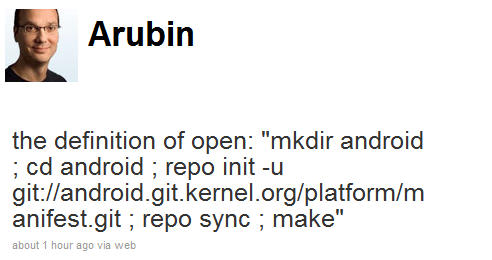 With this Andy has shown one of Android's true strengths: just about anyone get get hold of it and tinker with it as they please. It is because of this that we see so many great customizations, improvements and entire ROMS from the Android community.

Let's just hope Andy sticks around on Twitter in case "Vegeman" says anything else foolish.

The terminal commands do the following:

System Info Widget Review + Giveaway Of 20 Copies. Is It The Geekiest Android Widget... Ever?