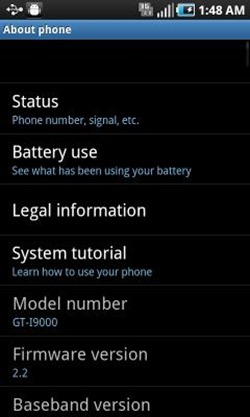 The word "gradually" isn't exactly encouraging, and neither is the fact that North America is towards the end of the list. Still, the news alone should be enough to brighten the day of a whole bunch of people.

The Android 2.2 upgrade will be available via Kies, Samsung’s unique in-house software upgrade program. Kies can be downloaded at the Samsung mobile website (http://www.samsungmobile.com).

- Adobe® Flash® Player 10.1: Allow the web browser to make full use of the whole web

The Android 2.2 upgrade will be available from the mid of October 2010 in the Nordic region and gradually rolled out to other European markets, Southeast Asia, the Middle East Asia, North America, Africa and rest of the world.

[Updated: Now In The Android Market] It's Live! Download The Full Version Of Angry Birds Right ...