Things are really coming along in the Google TV world, aren't they? First, a survey by Appcelerator showed that developers were showing strong interest in Google TV. A few days later, Google revealed that major players in the entertainment industry were backing GTV in a big way - and also gave us a short preview.

Fast forward to today, and Sony has opened up registration for its Android Developer Site. Thus far, there doesn't seem to be much to it - but they promise that there will be "... exciting news for the Sony Internet TV very soon," and "In the future, look for more extras such as images, examples, tips and techniques to help you create exciting new applications." 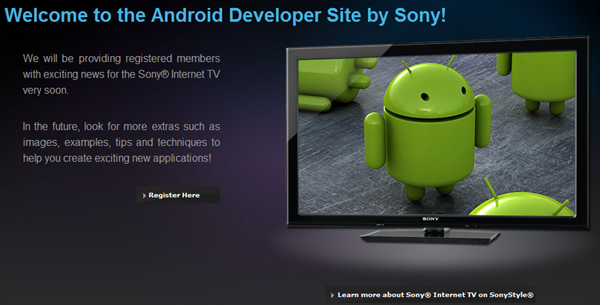 As mentioned above, the big players already back GTV - but that's only half the equation. It looks like Sony is trying to draw in smaller developers to support Google TV so that there's more support for the system from the start. Doesn't seem like a bad plan at all, does it?