A few days ago, a new version of Universal Androot was released with support for Froyo, but a number of devices were still incompatible. Enter SuperOneClick - a new root method released yesterday by XDA-Devs forum member CLShortFuse. Being just a day after release, it's too early to tell what devices SOC does/does not work on, but Fuse says it works "with almost all [Android] phones and all [A]ndroid versions. (including the i9000, Droid, Nexus One)." You can also allow non-market apps on devices that were previously locked down (i.e. the HTC Aria).

Rooting using SOC is just like other versions of one-click or simple roots: download the zip, open the .exe, and follow the instructions. Based on user comments, it looks to be a fairly simple process. 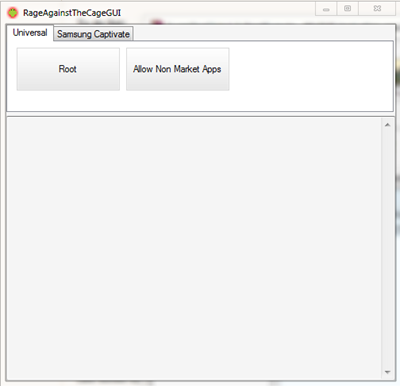 Thus far, SuperOneClick only works on Windows, but Fuse is planning on porting it to Mac/Linux in the future. Also missing: an "Unroot" button - but that's also planned for an upcoming release. He created and tested SOC himself, so if you use it and have some spare dough laying around, consider sending a few bucks his way.

Be sure to sound off in the comments and let us know your experience (don't forget to include your device!) so that other readers know what to expect.

So far, besides the Captivate, we've been able to confirm this working on the Droid running 2.2, the Nexus One running 2.2.1 (FRG83), and Sprint HTC Hero running the latest update. ShortFuse has started a Root Incompatibility List - thus far the only phone on it is the EVO.
Update: Download link updated to newer version (from 1.3 to 1.4).
[Source: XDA-Devs]
subscribe