The old myTouch 3G may not have been the most powerful Android device out there, so thinking of a phone that goes by the same name while promising to be T-Mobile's next flagship device may take some getting used to, but if this leaked spec sheet proves to be true, it might just be worth it. 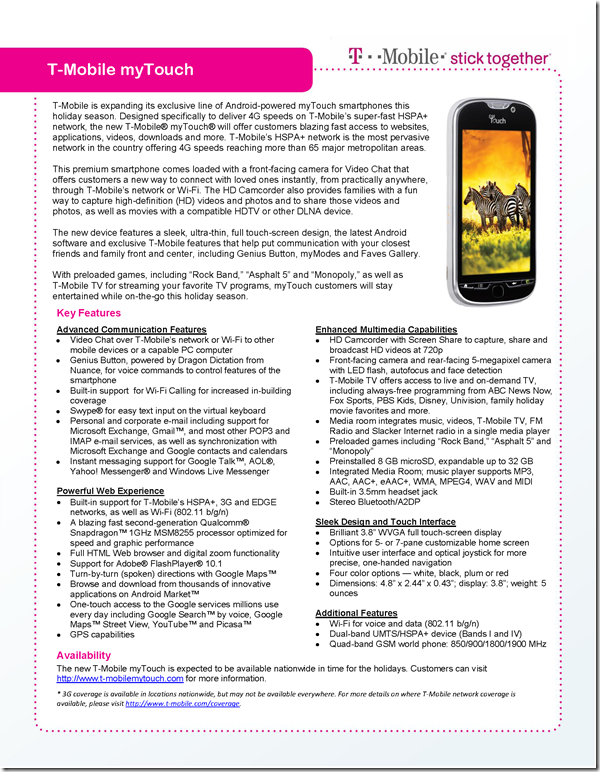 Most of what we see above has already been announced, including the new myTouch's WiFi calling capabilities, but the sheet does pack one big surprise: T-Mobile TV. Unfortunately, not much is known about the service yet, but the third entry under the "Enhanced Multimedia Capabilities" section assures us that T-Mobile will be offering:

Otherwise, the sheet mostly confirms the specs we already knew, such as the 3.8" WVGA display, front-facing camera, and 1GHz Qualcomm MSM8255 processor. It also takes note of the myTouch's pre-installed apps, which were also previously announced:

What the sheet does not announce is the pricing or release date (unless you consider "in time for the holidays" confirmation of when you can buy this thing), both of which could be deciding factors in how many new customers the nation's fourth largest national carrier manages to grab.

Motorola Flipout For AT&T Rooted; All Five People Who Plan On Buying It Are Overjoyed