Sony's Crackle app has landed in the Android Market, and brings streaming of original shorts, TV shows, and movies to Android. The app is free, but requires a premium subscription to view TV shows and movies. At $5/month, the premium content isn't necessarily expensive, but after quickly running through the app, I'd have to say it's probably not worth it unless you're pretty desperate.

A word on the app itself: it's small, installs quickly, and runs smoothly. I still think it's lame that there's no better solution to purchasing the premium content than paying as though it were a separate app, but that's not really Sony's fault I suppose. Also, when you scroll through content in the app, the background turns black (it's normally smoky). It's a little weird and cheap feeling, and I'm not sure if it was intentional (so that it's never hard to read the titles), or just something that their testers missed. 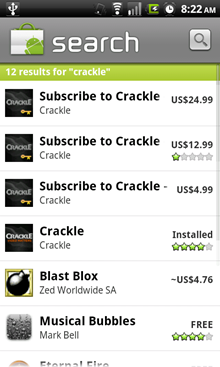 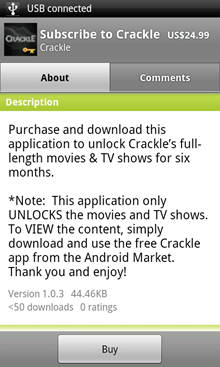 As for the app itself, open it up and you're greeted with available content: 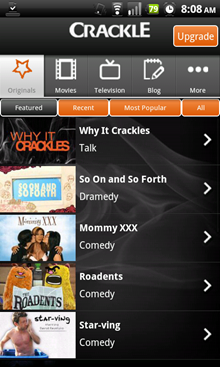 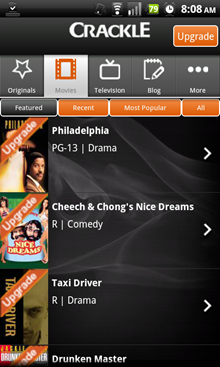 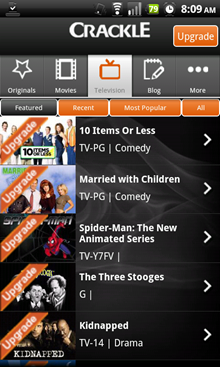 The premium content is very... mediocre. There are a few decent options in there, but as a whole it's certainly not compelling (at least, to me). Frankly, in terms of value, free Hulu offers more than paid Crackle does - by far. Then again, the free content isn't half bad. Quality is about on par with YouTube (standard quality - no HD here). 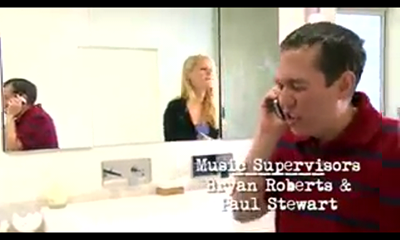 Am I the only one who pictures Iago (the parrot) from Aladdin every time I hear Gilbert Gottfried's voice?

The app is worth a try, especially if you find yourself with 5-10 minutes of boredom on a regular basis. The free minishows are entertaining, and certainly fill the gap as well as most free Android games. That said, YouTube is probably equally as entertaining but infinitely more flexible. For me, this app isn't a keeper.