A while back we were shown a leaked release of Adobe AIR for Android and told stories of its incredible capabilities. Well, the time has come. Twitter is now lighting up with reports about it and it is now available in the Android Market. 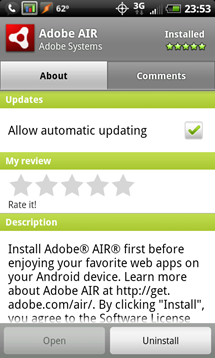 Here is Adobe's explanation of AIR for Android:

Adobe® AIR® will let you publish ActionScript 3 projects to run as native applications (.apk) for the Android OS. These AIR applications can be delivered to Android devices through Android application stores such as the Android Market.

Developers can write new code or reuse existing web content to build AIR applications for the Android OS. Because the source code and assets are reusable across the Flash Platform runtimes, Adobe AIR and Flash Player, it also gives developers a way to more easily target other mobile and desktop environments.

So there it is, folks. You can now install Adobe AIR on your Android device and... wait for an application to get released. It can't install AIR's typical .AIR packages so you won't be able to use your favorite desktop applications with it. For now, it's just kind of sitting there having potential but soon, we hope, there will be some awesome and powerful software available for it.

You can download Adobe AIR for Android by scanning this QR code with your Android phone: 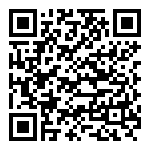