Excellent news for Verizon customers wondering just when exactly the largest carrier in the US is going to start gunning after Sprint 4G and other competition. In a press release published a few minutes ago from the CTIA conference, Verizon detailed plans for 4G LTE expansion that we can expect by the end of the year.

The press release outlines and lists all 38 major metropolitan areas and 60 airports that are set to receive LTE coverage (exact locations - thank you, Verizon, that is how press releases should be done!). A handy map that you can see below provides a quick overview of what's coming, at a glance. 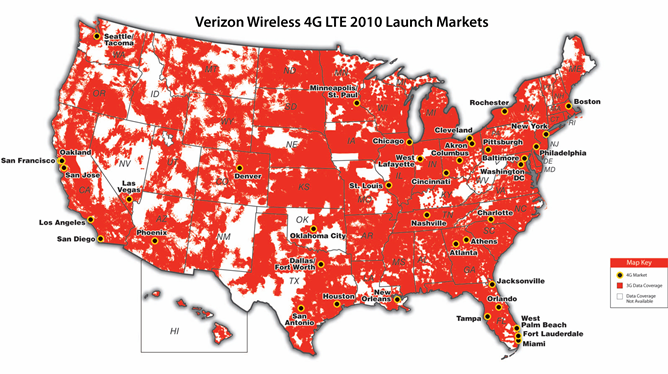 Now about them 4G LTE-enabled phones, when can we expect some of those, Verizon?

10/06/2010 BASKING RIDGE, NJ, and SAN FRANCISCO, CA — Verizon underscored its rapid deployment of the world’s first large-scale 4G Long Term Evolution (LTE) network today from the CTIA Enterprise & Applications™ 2010 conference. Lowell McAdam, president and chief operating officer of Verizon, detailed the company’s major network launch in 38 major metropolitan areas, covering more than 110 million Americans, by the end of the year. In addition, the company is launching 4G LTE in more than 60 commercial airports coast to coast – both the airports within the launch areas plus airports in other key cities.

McAdam said, “We are driven by the vision to provide ubiquitous wireless broadband connectivity and mobility to rural and urban Americans alike. With our initial 4G LTE launch, we will immediately reach more than one-third of all Americans where they live, right from the start. And, we will quickly introduce 4G LTE throughout the Verizon coverage area.”

McAdam highlighted the metropolitan areas for the initial launch, which include:

(A list of all metropolitan areas and airports is located at the end of the news release.)

Verizon Wireless is building its 4G LTE network with the same commitment to performance and reliability for which it has long been recognized. Verizon Wireless’ laser focus on reliability is based on rigid engineering standards and a disciplined deployment approach year after year.

Enterprise users, businesses and individuals can immediately benefit from Verizon Wireless’ 4G LTE network this year. While Verizon Wireless’ 4G LTE network promises much more than speed, the first application gives employees the ability to work at significantly faster speeds and improved latency, increasing productivity and the opportunity to get work done where their business takes them.

McAdam continued, “Verizon Wireless’ 4G LTE network will also be available in the commercial airports in the 38 metropolitan areas, plus we’re launching airports in other key cities coast to coast, giving road warriors added coverage when they travel. Every time we’ve built a next generation network, our customers have seen real benefits to their bottom lines. Taking advantage of the first large-scale LTE network on the globe gives our customers a competitive advantage.”

Verizon Wireless’ 4G LTE rollout positions the company to be the global leader in 4G LTE deployment. Verizon Wireless expects 4G LTE average data rates to be 5 to 12 megabits per second (Mbps) on the downlink and 2 to 5 Mbps on the uplink in real-world, loaded network environments. These speeds are significantly faster than Verizon Wireless and other wireless providers’ current or promised 3G network speeds.

By leveraging its 700 MHz spectrum for LTE deployment in the United States, Verizon Wireless is capable of quickly deploying a high-quality wireless broadband network with excellent coverage. The company is currently installing LTE equipment at existing cell sites and switching centers around the United States as part of its extensive, ongoing investment in its voice and data network infrastructure.

In addition to the 38 major metropolitan areas, Verizon Wireless is launching its 4G LTE network in West Lafayette, Ind., home of Purdue University. The public university is using several innovative software applications on Verizon Wireless’ 3G network that improve student engagement and success, and Verizon Wireless is working with Purdue to explore the next phase of how 4G LTE technology can improve e-learning across the nation.

The Bad News: Full Version Of Angry Birds For Android Delayed To Next Week. The Good News: You ...