I have fat fingers. There. I said it. With my old Sanyo Katana, it wasn’t a problem because I would just multitap and tap and tap to enter text. But when I finally made the jump to a smartphone, I quickly ran into a stumbling block with the virtual keyboard.

The HTC Hero has a pretty compact screen, especially in portrait orientation. Trying to hit letters on that tiny virtual keyboard drove me crazy, particularly since I usually touch type and find hunting and pecking my way across a QWERTY keyboard difficult. (I also recently spent some time with a BlackBerry 8310 while travelling ... I’m not sure a tiny physical keyboard would help me.)

Fortunately for me, just as I was getting extremely frustrated with the keyboard, Access Co. Ltd. released its first version of Graffiti for Android. I was a dedicated Palm m105 user for a long time, and I remember fondly how quick and easy Graffiti was to use.

Download and install Graffiti from the Market by clicking this QR code from your mobile or scanning it using Barcode Scanner. 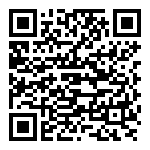 Once Graffiti for Android is installed from the Marketplace, a few steps must be taken to activate it:

Once done with the Settings, go to any text input field, long press and select the Input Method option. From here you can choose between Android keyboard, Swype, Graffiti, Simeji or any other keyboards or input methods installed on your phone.

With Graffiti as the chosen input method, whenever you tap on a text input field, a black box - the Graffiti input zone, opens across the bottom third or so of the screen when in portrait orientation; in landscape mode, the Graffiti input zone fills about half the screen. By comparison, the stock keyboard takes up half the screen in portrait mode and three-quarters of the screen in landscape. Just like on a classic PalmPilot, the input zone is divided into a letters area and a numbers area. To input a character, just trace the desired Graffiti stroke in the appropriate area. The app uses the original, pre-2003 Graffiti alphabet, sometimes referred to as Graffiti 1, and is based on the Xerox Unistrokes patent. 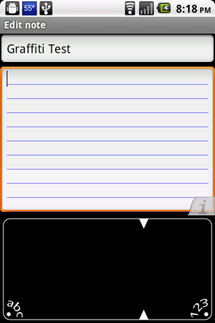 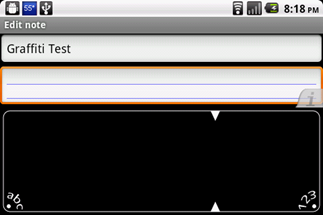 It is important to note that this is not a handwriting recognition system. Graffiti uses a simplified script in which most letters and numbers can be written with a single stroke. Some strokes are the same as a normal letter — a C or O for example are fairly straightforward to write — but other letters are a little more obtuse.

Punctuation marks, accent marks and some other characters, as well as capitalization, are handled through a combination of taps and strokes. Overall, it is fairly easy to learn and remember, and a six-screen Graffiti tutorial is built into the app in case you forget how to form a letter; just stroke up from the center of the input zone to the top of the box. (If you try to write too quickly and trace too closely to the top of the input zone, you may find it opening unintentionally upon occasion, too. Just press the back button and it will go away.)

Access has posted a series of online video tutorials to help with learning how to use Graffiti, and the Graffiti (Palm OS) article on Wikipedia includes a good alphabet chart.

Overall, text entry is fairly accurate. The shape traced on the screen is ghosted as you move your finger, so you can see how accurately you are creating the Graffiti characters. Once you're comfortable with Graffiti strokes, it is fairly easy to input text relatively accurately without watching the screen.

Sometimes there's a lag on the phone that causes characters to not register as quickly as they are entered. It seems to be a function of the phone's processor being overtaxed. According to Access, the new features can require "a bit more" processor power, but a company spokesperson said there have not been any problems with the HTC Evo or other newer phones tested by the company. The lag was prominent with version 2.0.3, but with the 2.0.4 update (released on Oct. 5, 2010) things are much improved. 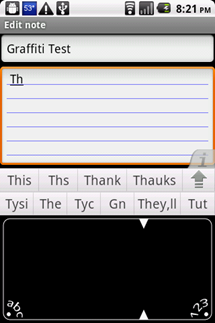 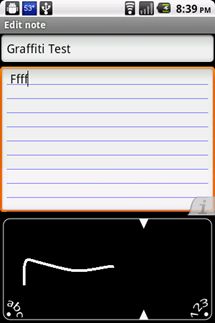 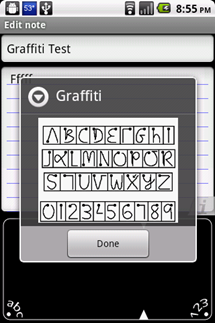 Because the Hero has a capacitive touchscreen, a traditional stylus doesn't work. However, capacitive styluses are available, and according to Access they work with the app. I wasn't able to get the anti-static bag hack to work with my Hero, but I can't say for certain if it was due to the two anti-static bags I tried, the phone or some other problem. I considered but ultimately decided not to try the hot dog hack, figuring it would offer no improvement in input accuracy.

A few options are designed to make text input easier. Graffiti can be set to autocapitalize the start of a new sentence, and a text prediction option is available, too. I usually do not use text prediction, and found it a little awkward, but I imagine that if you regularly make use of text prediction features with T9 or other input methods, then the Graffiti for Android approach should be intuitive and easy enough to use.

Text prediction is based on QWERTY keyboard layouts, not Graffiti stroke shape, so if you stroke a B, it will start looking for suggestions that start with B, N, G, F, V and H, instead of D or P, which have a similar stroke shape. The learning feature seemed to work fairly well with the system offering up recently used words fairly quickly as part of text prediction — in fact, it quickly learned (and started offering) some nonsense strings that were entered as part of this review.

For entering Japanese, rōmaji (a Latin alphabetic form of Japanese) is used and the corresponding katakana or hiragana are entered. A button in the text entry area toggles between suggesting English, katakana or hiragana, and another button will convert them to kanji. Text prediction offers results in a mix of Latin letters, katakana and kanji.

Graffiti can be used to enter most any language that uses the basic Latin alphabet as well as Japanese, but it only includes dictionaries for English and Japanese. According to Access, the app currently cannot access built-in dictionaries on a phone for text prediction (which is one reason it is a 4,142 kb download), but it is something that is being looked at. Additional features necessary to support other languages and scripts are being prioritized and considered, according to the company. 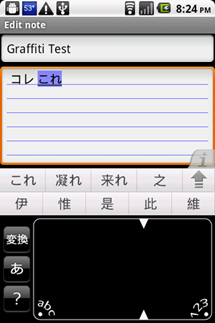 Comparing Graffiti for Android to Graffiti on an old Palm m105, entry via finger feels less accurate than with the stylus. However, while I find myself writing more quickly with the stylus, the error rate for both methods was comparable. I'd be interested in trying a capacitive stylus with the Hero to see how it speeds up text entry and accuracy. In Palm's original implementation, touching the ABC or 123 notation in the lower corner of the text entry area called up a virtual keyboard; in the Graffiti for Android app, these notations only delineate which area is used for numbers or letters. Calling up a keyboard might be a helpful feature, especially if you've forgotten a stroke combination for a punctuation mark or less-often-used character.

Graffiti has worked reliably on my HTC Hero, both when it was running stock Android 2.1 with HTC Sense and since it’s been rooted to run 2.2 and Cyanogen(mod) 6.0. Reviews in the Market seem to show a breakdown in feelings about Graffiti for Android: Those who used Graffiti with a Palm product love Graffiti for Android; for others, the views are more mixed. Undoubtedly, the nostalgia factor is part of the appeal of Graffiti for Android; however, if you take a little time to learn the shorthand alphabet, it works well.

Motorola Bravo, Flipout, And Flipside Make Their Debut On AT&T