Assuming this leaked image is real, Sprint has got two new Android devices in store for its customers, although one of them is hardly new at all: the Kyocera Zio, which will be branded as the Sanyo Zio, and the Samsung Transform, which appears to be another Android device, perhaps even from the Galaxy S series.

The Zio probably won't fire anybody up; it was announced last March, and even then it was considered a mid-range phone. In the few shots that exist of the device, it appears to be running stock Android, and is still thought to launch with Android 2.1.

The Transform, on the other hand, could be a good alternative for anyone who isn't interested in the physical keyboard of the Epic 4G; but, because it isn't the Pro version of the Galaxy S, it likely won't include 4G or a front-facing camera.

The only thing I don't understand: what's up with the orientation on the Transform in the picture? Photo fail? 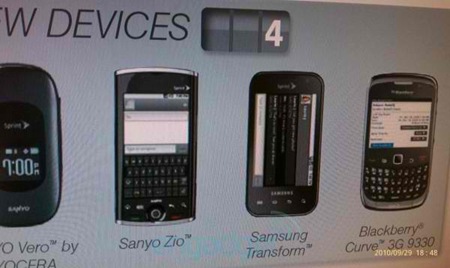