Well, the title says most of it, and what it doesn't is pretty easily expressed in a chart: the stock browser - even in Froyo - isn't the best option available. In fact, it's not even close, especially for sites that haven't been saved alread:Skyfire 2.0 is faster by 3.3 seconds. The gap for saved sites is less significant, with Opera Mini faster by 1.4 seconds. 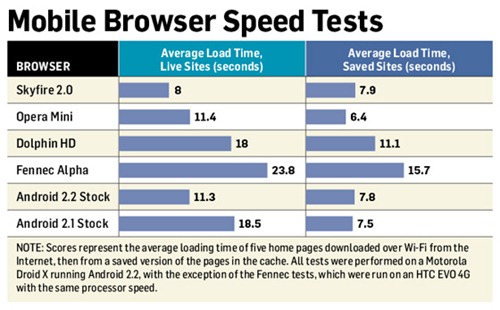 Surprisingly, Mozilla's Fennec comes in last in both categories; then again, Fennec is still considered alpha, and it's a fairly safe bet that times will drop as development progresses. Skyfire's faster new load time can likely be attributed to its handling of Flash - it saves time by transcoding the videos on its own servers rather than on the local device. Similarly, Opera uses server-side compression, meaning that pages load faster, and most of the calculations are done by the time the page hits your device. Finally, it's nice to see confirmed in numbers what I've commented on before: how much of an improvement the Froyo browser over Eclair's.