All of Samsung's Galaxy S family have the same 4.0" Super-AMOLED screen, share a common iPhone-esque UI, and ... well, that's about it. The disparity between features in the SGS line has certainly caused some frustration with users; two have a flash, one has a keyboard and 4G, one has Bing (not really a feature worth crowing about), and two have front-facing cameras. Those two are the appropriately-named Epic 4G and the mothership, the Galaxy S i9000, which is mainly sold in Europe and Korea.

Considering the striking similarity in the appearance of the i9000 and the Vibrant, it's forgivable that users would confuse the two models, questioning the absence of a front-facing camera on their own devices.

Ever ready in the hour of need, the hack-junkies over at XDA-Developers have set things right in the world. User/superhero siirial has succeeded in installing a front-facing camera from the i9000 in his own Vibrant, and has confirmed that it works with a 3rd-party kernel and driver. The camera itself only costs about $15, but it's the technical know-how required that you can't price. The instructions are fairly vague and certainly not for the inexperienced. 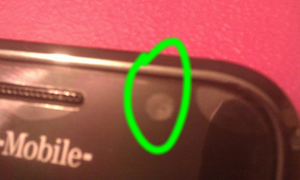 However, if you feel like voiding your warranty in the quest to check your hair, siirial's instructions are reprinted below:

How to do it:
1. Shutdown your Vibrant, remove battery, sim card, sd card
2. Remove each screw in the back plate
3. Using an opener tool (or something to wedge between the back and front plates), snap off the back plate.
4. Disconnect all of the "snap on" assemblies
5. Remove the Camera
6. being careful not to snap the connection to the power button (it is glued on the phone), move the main board to the side slightly so it stays safe.
7. Using your method of choice (paint remover chemical or fiber glass pen), remove the paint inside the circle molding where the FFC mounts to.
8. Install camera when area is fully dry (5 minutes or so)
9. Put phone back together
10. Flash Eugene's Froyo (R3 is latest as of writing) - remember to flash a 2.1 kernel whenever trying to nandroid restore or installing a 2.1 rom so you don't brick your phone during the downgrade
11. adb push cameradata file to /system/cameradata
12. boot up phone, download "mirror app for samsung galaxy s" from the market
13. Check your hair or something using your newly installed FFC!! 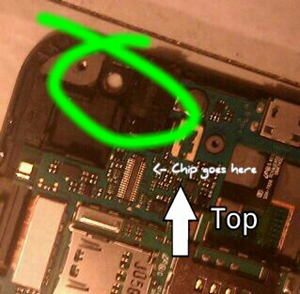 You can follow along with the back-story of the project and see any latest developments at the XDA thread below. Hopefully someone will take it upon themselves to do a more detailed pictorial guide, if anyone else is brave enough to try this mod out.

Motorola Begonia, The Successor To The Cliq, Rumored To Launch On November 1, Feature WiFi Calling