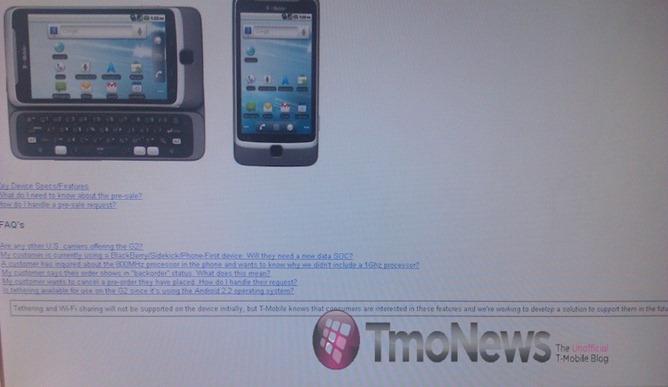 While T-Mobile's G2 may support calling over WiFi, according to TmoNews, it won't support one of stock FroYo's best features: turning the phone into a portable WiFi hotspot.

T-Mobile's official statement on the matter?

“T-Mobile does not currently support handset tethering or offer a tethering rate plan. Though tethering and Wi-Fi sharing will not be initially supported on the T-Mobile G2, we know that consumers are interested in these features and we are working to develop a solution to support them in the future.”

A flawed explanation at best, especially since the Nexus One, which runs on T-Mobile's network (unless you've got the AT&T version of the phone), supports the WiFi hotspot feature. Maybe T-Mobile should mention that it just doesn't want its shiny, brand new HSPA+ network to get clogged down with people watching Hulu on their desktops while torrenting from their laptops and reading the New York Times on their iPads all at once. Or rather, they don't want that happening until they can get people to cough up a hefty "tethering rate plan." Oh, those carriers.

Verizon To Jump On The Capped Mobile Data Plan Bandwagon