People like Android because they like openness and because they like choice. The ability to boot a second, open-source operating system on your Android device is then a pretty compelling proposition. Following a flurry of activity around various fora, some progress has been made in booting the Linux-based Maemo 5 successor, MeeGo, on select Android devices. These devices, namely the Nexus One, Streak, and Desire are all based on the Snapdragon QSD8250 and it is that chipset the development community is focusing on. 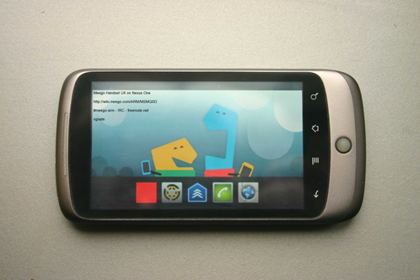 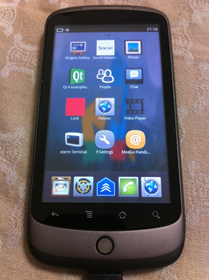 Right now, it’s unclear exactly how functional the OS is, and, as usual, the development is suffering from issues with driver cross-compatibility and other similar obstacles. One particular stumbling block appears to be the closed-source nature of Qualcomm 3D drivers, preventing hardware acceleration of the user interface and resulting in painfully slow response times.

The Nexus One port appears to be making progress the fastest, with dev @vgrade recently tweeting the above pictures of the MeeGo homescreen and menu. Likewise, @Termana posted a blurry image of the homescreen on the HTC Desire today, which is encouraging but not much of an indication of the OS’s readiness for use.

For those interested in technical details, according to @vgrade, progress is stalled due to the absence of redistributable glibc 3D drivers, as opposed to those using Android’s Bionic libc library, and it is up to Qualcomm to release these drivers to allow for a proper port.

Discussion of the port is ongoing in the #meego-arm channel of the Freenode IRC network, but don’t expect to understand much unless you speak Linuxese.

Further Reading: MeeGo ARM MSM/QSD Wiki; How To Run Debian With X11 On Your Nexus One

Sony Ericsson: No Plans For Any New Symbian Products, It’s All Yours Nokia