Why is that? AMOLED is supposed to only use up power on non-black pixels, right? Well, as LaptopMag points out, the majority of webpages are actually dark text on a light background, a scenario in which AMOLED actually uses more power than an equivalent backlit LCD. The results of LaptopMag’s testing bear this out (the x axis measures the amount of hours each phone lasted):

Even the monstrous Dell Streak puts up a commendable showing compared to its OLED brethren.

As you can see, the Droid X is top of the pile, with about 70% longer endurance than the HTC Incredible. Oddly enough, Sprint’s Epic 4G manages close to an hour longer than its AT&T and T-Mobile Galaxy S kin, despite having identically rated batteries. Guess the Epic 4G is just awesome like that.

So what’s the moral of the story? If you do a lot of web browsing, AMOLED isn’t exactly the panacea for battery life. What I’d be interested in, though, is the same test done with CyanogenMod’s colour inversion enabled in the browser. In that case, the AMOLEDs should excel for the very reason that dragged them down in this test. 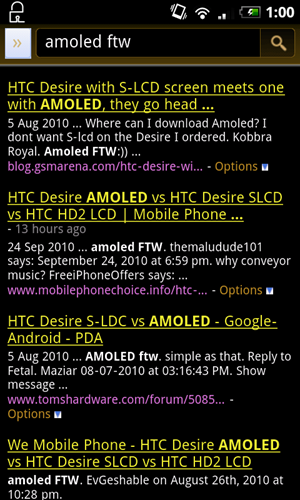 Don’t feel too down, AMOLED fanboys. You always have your viewing angles and saturation to keep you happy. Meanwhile, you can lick your wounds in the comments below.

PS – Anyone kind of curious about how the iPhone 4 would do in the above test? Make it happen, LaptopMag.

The article in the source is about a month old, but we just stumbled on it and considered the information presented to be very useful.
subscribe