That said, Sybase made a spokesperson available to talk about the results, and I'm sure they could clarify things (or pull the wool over my eyes - I'm a sucker for slick talk). Now, I think that's more than enough disclaiming - let's get to the survey.

It seems that the survey is looking to compare consumer preference of tablets or laptops; that is, if a consumer had money to spend on one or the other, which would they choose? Of those polled:

The results also showed that Android has high brand loyalty but low brand recognition: 50% of Android users showed preference to purchasing an Android tablet, but of non-Android owners, only 13% have "stated intent to buy an Android tablet."

As far as features go, the two most important by far are software/app support, and a keyboard: 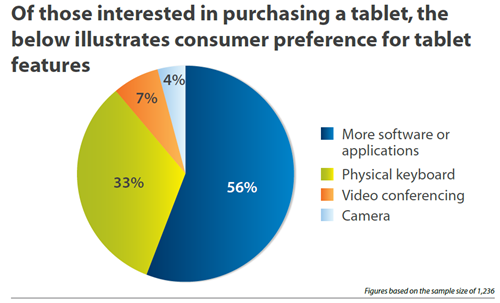 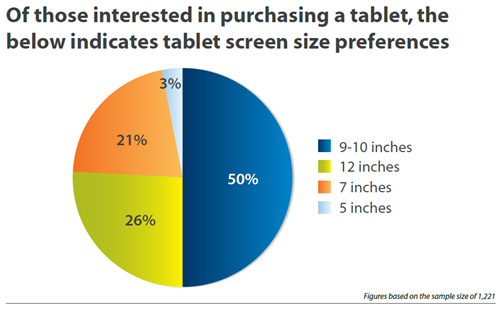 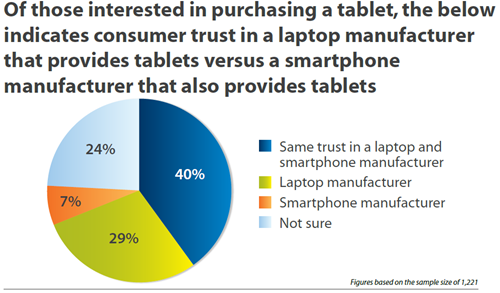 And most people believe that using a tablet at work will improve their creativity and innovation (again, hard to wonder how much the iPad influenced results here): 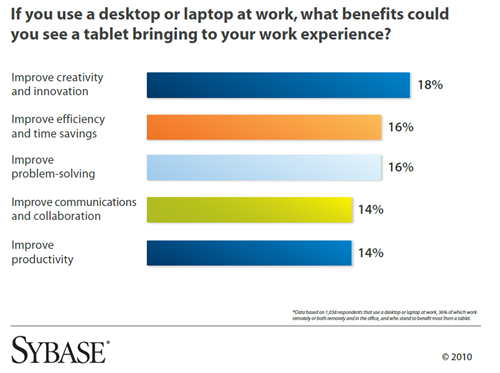 Fairly interesting overall, although it's disappointing to see that the iPad isn't mentioned whatsoever in the report - it's hard to believe it wouldn't skew results, or at least shed more light on the situation.

Approximately One Quarter of Americans would Purchase an Android-based Tablet; Over Half Prefer to Buy a Device at a Lower Cost with an Attached Data Package

Tablets in the enterprise

"As users clamor to bring the latest devices into the workplace, enterprises cannot avoid evaluating the business case for tablet and other new device support," said Willie Jow, vice president mobility, Sybase. “Sybase is focused on continuing to deliver industry-leading enterprise mobility solutions that help transform businesses to better connect with their customers and better enable their employees.”

For graphical representation of the survey findings please, download the PDF.

About the Study
The referenced study was commissioned by Sybase and conducted by Zogby International.  The study consists of online surveys of 2,100 adults in the U.S.A sampling of Zogby International's online panel, which is representative of the adult population of the U.S., was invited to participate from 8/27/10 to 9/14/10.   Slight weights were added to region, party, age, race, religion, gender, and education to more accurately reflect the population. The margin of error is +/- 2.2 percentage points. Margins of error are higher in sub-groups.  The MOE calculation is for sampling error only.

About Sybase
Sybase, an SAP® company, is an industry leader in delivering enterprise and mobile software to manage, analyze and mobilize information. We are recognized globally as a performance leader, proven in the most data-intensive industries and across all major systems, networks and devices. Our information management, analytics and enterprise mobility solutions have powered the world’s most mission-critical systems in financial services, telecommunications, manufacturing and government. For more information: www.sybase.com. Read Sybase® blogs: blogs.sybase.com. Follow us on Twitter at@Sybase.

Dell Streak Headed To Best Buy While Its 7-Inch Brethren Gets Teased (Could This Be The Looking ...