Just over a month ago (before it launched), the Quadrant scores of the Motorola Droid 2 leaked. We called it a monster when it hit 1,458. Today, Droid-Life has scored a few more leaked benchmarks, this time of the Droid 2 World Edition (which is rumored to be replacing the D2). The results: a Quadrant score of 1709 thanks to a CPU clocked at 1.2 GHz. For perspective, keep in mind that a stock EVO manages around 1100. 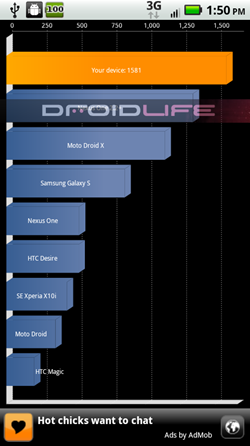 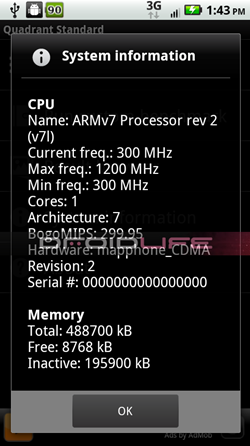 Just a note: the first Quadrant run yielded a score of 1566, while the second hit 1709. I'd guess the score on the screenshot above was a new set of runs, as it seems like an uncached score.

Other than the higher clocked CPU, the hardware is essentially identical to the DX and D2: 512 MB of RAM, Froyo, and 5 MP Camera. Pretty impressive.