Today, Launcher Pro, one of the best homescreen replacements for Android, got a nice update, introducing a couple of new features and bug fixes. I replaced the bloated Sense UI on my EVO with Launcher Pro Plus about 2 weeks ago, and ever since then, half of my co-workers did the same, seeing what it can do.

The new update finally introduces a customizable number of icon columns and rows, which is no longer limited to 4 or 5. ADW actually had this feature for a while, so I'm glad LP finally caught up.

Another major addition, though for Plus users only, is the Friends widget. This widget combines Twitter and Facebook updates into one and is essentially a replacement for users having Sense's Friend Stream withdrawals. 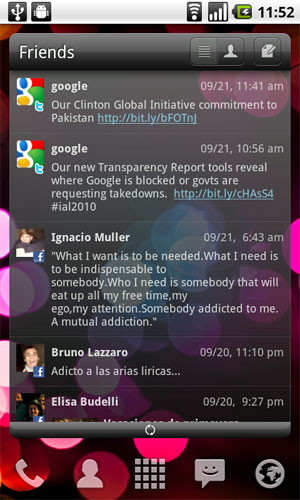 For Plus users only:

Download Launcher Pro from the Market by clicking on the QR code below from your mobile or scanning it using Barcode Scanner: [Update: Also Includes A GPS Fix] The Samsung Captivate Is Receiving An Update (But It Isn't ...